A Communication From Twizzle

Well thankfully Twizzle has been keeping an eye out on things, I think I've taken my eye off the ball recently. Its the sun I like falling asleep up by the trees at the back.

Luckily I've just received a communication from Twizzle.
Chameleon has been injured.   The day that we went on holiday he tuned up for his breakfast and his face was in a right state.
Above his left eye and all around the left side of his face he was bloody
and grazed.   We were in the Cattery and no way could it have been Mogsie.   I know that Mogsie and Chameleon have had some awful fights in the past but they seem to have
arrived at a truce and now sit together outside the back door waiting to be
fed.   Mogsie, at the moment, has reverted to being an outside cat because
of the weather.
Chameleon has obviously been to the vets as his face has been shaved,
although one day last week his face was all bloody again, and it seems to be
clearing up nicely now.
Secondly, we have a new cat on the block.   He looks like George but with
much longer legs but he seems to be a fighter. I've called him Tux.   I
believe that he lives in Chestnut.   I wouldn't be surprised whether he is
the one that has injured Chameleon.
Thirdly, I think that we have a Turf War on our hands namely Mogsie and Tux.
Mogsie seems to think that Tux is a reincarnation of George and you know how
Mogsie hated George!   Last night they had the most horrendouse fight down
C's drive and daddy had to break it up with his umbrella.   I don't know which of them came off the worse but I've checked Mogsie over and he appears to still be in one piece although over the last few weeks he does seem to have had some bald patches. 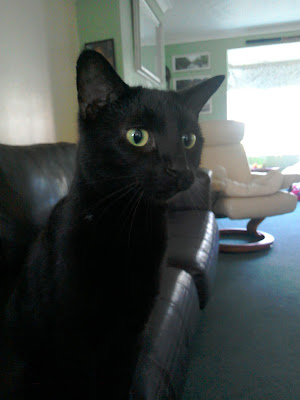