I've finally managed to catch hold of Mogsie, he was out enjoying some of this morning sun, strange day weather wise, sun then cloud, cold then warm.

Anyway he was out catching sun sun when I spotted him out of the window. I called over to him and he nodded back.

I asked him if we could have a chat. He finished licking his paw and smiled back.

First of all I said I wanted to let him know about Foxy's vandalism in our garden the other day. I explained what had happened, Mogsie silently listening, taking mental notes.

When I finished I looked at him waiting for him to speak but he said nothing. I think I was wanting to hear and see outrage but all I got back was a blank impression.

In the end I had to break the silence.

"Nothing." Came his short reply.

"Nothing?" I was a bit surprised.

"Keep you and River safe but apart form that do nothing. I said before I have this situation in control and he's acting pretty much as I thought he would so for the moment just do nothing, my plan is working."

The look on my face must have given away what I was thinking. Mogsie smiled;

"I promise you when the time is right I'll let you in on it but at the moment please trust me and just let things unfold, but be sure to keep me informed of any further incidents."

As frustrated as I was I had very little choice to go along with what he said.

"There was something else I wanted to talk to you about. There's a girl I like, Sofia. I like her and I think she likes me but I'm not sure what to do about it."

Mogsie laughed, his head going backward, his tongue moving from side to side as it he was trying to dry it off in the wind.

I felt a little self-conscious and went a bit shy."

"Yes," I said, "George said I should speak to you about things, said he wasn't the best person to ask when it came to ladies."

"Ain't that the truth." I'm sure I saw a bit of smugness float across his cheek. I'd love to know what this was all about but the advice was a more pressing matter than getting a bit of gossip.

"So what do you want to know?"

"What do you want to do?" Seemed a simple enough question.

"I'd like to spend some more time with her. She comes and goes and I think we've been doing a bit of flirting but I've never asked a girl out before."

A warmth spread across Mogsies face and he turned to look at me.

I nodded and I'm sure blushed a little.

"Well then, I think it's simple. You should ask her how she feels about spending some more time with you. But it's important for you to think of her though. How much do you know about her? What does she like doing?"

"I don't know." Maybe this wasn't as simple as he first said.

"Treat her with respect, like a lady, try and find out a little more about her interests, does she like looking at the night sky for example or enjoying running through gardens or does she like surprises, a dinner in a favourite place?"

I tried to think.

Mogsie shifted position and looked at me a little more seriously.

"David there's no hard and fast rule but there are some very important things you should know. Always treat another person with respect, don't overstep a boundary, show her kindness, be true to who you are and be brave."

"Yes," Mogsie nodded and cleaned a bit of grass stuck between his teeth. "Be brave! ask her if she would like to go out on a date. It's clear, it's honest and if you don't you'll just be left wondering."

"Then you know where you stand and you can put this behind you. But think, if you like her, what if she says yes?" He smiled again.

"You really think I should?"

Mogsie nodded. "The important thing though is David is do you think you should?"

I thought for a moment and nodded back, Mogsie returned my smile.

"Fortune favours the brave my friend."

Well I hope so. 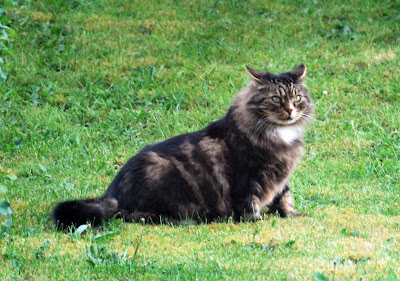