The Hairs On My Shoulder's Were Standing Up

I searched for Mogsie for ages and just couldn't see him anywhere, if fact I couldn't find anyone, guess that's a rainy day for you keeps everyone indoors.

Anyway just as I had given up on him up he pops, there sitting on the front lawn as if he had been there all afternoon.

"So I understand." I was a little taken aback.

"Yes, I wanted to tell you that I saw Chameleon earlier on, he was hiding on your garage. Hang on a second how do you know I was looking for you I didn't see anyone."

"You may not have seen anyone but you were spotted."

"Who?" I was getting little annoyed, I felt I was being berated.

Mogsie's tone softened, "Craig, he saw you, it's my job to have eyes and ears everywhere and thank you for looking out for us, one of the Sparrow Sisters told me about Chameleon, those eyes and ears really are everywhere." He smiled.

"The thing is David, I know I'm asking a lot asking for you to trust in me but I really do know what I'm doing and you are beginning to draw attention to yourself and that will put you in peril. That's the last thing I want, you see you are very special David, more special that you know."

"Yes, David very special, you coming here was foretold to me and you MUST keep yourself safe, there's people out there that have no idea of your specialness and through their own greed they could stop something happening that needs to happen."

"What do you mean?" The hairs on my shoulders were standing up, maybe there was a slight chill in the air.

Mogsie signed, a weight of burden upon him. "I can't tell you any more than I already have, if I do it could influence and changes things, I've probably already said too much but please believe me it's VITAL you find your own path, absolutely vital."

I sat and thought for a while and looking back at Mogsie I nodded;

Mogsie got up to leave.

"Hang on," I called after him. "Can you at least told me who foretold about me coming here?" I was desperate for some sort of an answer to something, everything was beginning to sound very mysterious and that unnerved me.

Mogsie turned, thought paused him before he spoke.

"OK but please David you must not repeat this to anyone, and I mean anyone."

I nodded, Mogsie looked into my eyes to see the truth of my words. Satisfied he signed once more;

"An old friend of mine, an old friend of all of Catworld, his name." He paused once more before continuing, "My friend, who told me about you coming here, I've mentioned him to you before, his name was Troy Lamore."

Suddenly my mind was all over the place, of course Mogsie had spoken to me about him before and so had George, way back so long ago, way before I entered The Time Consciousness and met Purlene. I'd forgotten all about it until Mogsie spoke his name again but now I remembered and now my catty powers were telling me Troy Lamore was much more important than I'd ever imagined and they were also telling me I needed to work harder at persuading Theo to join me and Doublay in reforming a new Coven of 3 and freeing Greego from his enforced sleep. How could I have been so sidetracked? 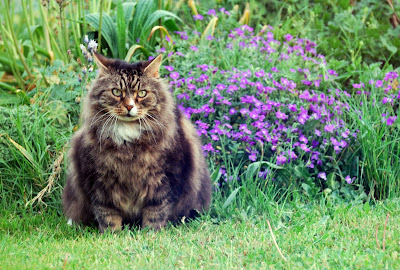