Sorry that I didn't have time to stop and chat the other day but I was on a mission.

I was just checking our territory was safe before I had to get home to look after Twizzle.   She's been very poorly and our Mum and Dad were really worried about her.   She had a terribly runny eye and then she stopped eating and just slept all day and night.

Anyway, she went to see the Doctor and she had a really high temperature and was dehydrated.   He injected saline under her skin and also anti-biotics and pain relief and she had to go back the following day.   He wanted to have a look at her teeth because he thought that she might have toothache but she wouldn't open her mouth.   Anyway, when she went back the following day she did let him have a peep in her mouth and he said that she would have to see the Dentist because she needed some teeth out.

Well, she was really frightened and I tried to keep her spirits up which is why you haven't seen me about much even though the weather has been nice.

David, let your Daddies clean your teeth and keep them healthy!   On Friday she had to have three teeth out but the Dentist said that she had been very brave.   I thought that when she got home she would be very sleepy but she was tearing about like a blue-arsed fly and she told me that they had been hurting a lot and she feels so much better now.

She has to have medicine three times a day and as she spits tablets out it's in liquid form. She's got our Mum on a piece of string as she'll only take it when it's got squirt cream on it and she has to keep reminding our Mum when it's time to give it to her.  Uh uh it's time!   Hope that I don't get taken to the Dentist, I might be very big but I'm not very brave!

Now that she's getting better I'll be able to get out a bit more and come and see you so we can have a real good catch-up.

Of course I responded as quickly as I could

Oh no that's terrible to hear but I'm glad Twizzle is feeling better now, I've heard (often) from my daddies that it's so important to keep your teeth clean and free of anything that could cause problems.

Daddy is a bit of a stickler for our teeth. Last year when I went for my check up they said the gum on one side of my mouth was a little red and he needed to watch out for it. They brought a toothbrush and paste but I hated the taste even though it was supposed to taste of meat, pink meat, yeah not a fan. They did however discover something that I think you should tell your mum about. They are called Dentabites, you can get them in the supermarket.

They've been giving me some every day in the morning, with my dinner and then as a late night snack, they taste really good, they’ve replaced Dreamies for me, daddy said I was getting addicted to them.

Anyway I had my yearly check up about a month ago and ta dah no problems my gums are all back to normal and my teeth are sparkling, daddy clapped his hands when he heard so I guess they work.

Twizzle is such a pretty girl she can pull off any look even a slightly gappy grin. Please give her my love and get your mummy and daddy to give them a go.

All my love David-Shiro x 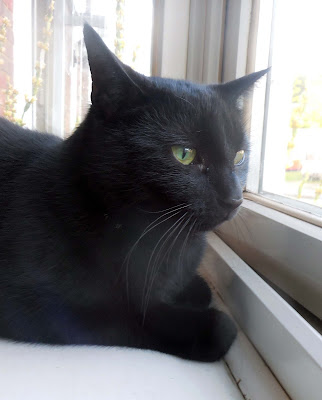