I'm Sure She'll Be In It - Her Reputation Proceeds Her

I've just had my chat with Ginger Cat.

I was enjoying the day on the sunshine shed, it's sunny but there's the odd cloud too so I wasn't getting too hot sitting in it when all of a sudden there he was sitting in front of me just staring and smiling.

We exchanged hello's and general chit-chat pleasantries and then he said what I was thinking all along. He had also been to the Time Consciousness and said he saw me there.

I was dumbstruck that he was so upfront about it and relieved at the same time, for so long I've been wanting to ask him if it was him I was there. Now I knew.

I also understand that you've been having a bit of trouble trying to re-form a new Coven of 3.

I nodded and told him how I'd been trying to persuade Theo and that although Doublay had agreed he was now in hiding since all the trouble with Foxy Lectar, Flash and the New Cat Crew.

"I might be able to help you there." He said. "I've contacts far and wide and it just so happens that I know one of them is a witches familiar."

My heart jumped, nervous and excited.

"Really!" I almost jumped to give him a hug.

"No problem." He smiled back. "It might take a little while,ss he lives a bit of a way away but I'm sure she'll be in it. She likes a good challenge."

"Thank you so much. I've been having real problems with this, my friend Greego he's been cursed with a sleep spell ofr over a year now."

"Oh yes I know Greego the Pixie, I think there's very few who haven't either met him or heard of him. His reputation proceeds him."

He grinned a knowing smile, nodded and jumped down into the gardens at the back of our house. "I'll be in touch."He shouted as he sped away. 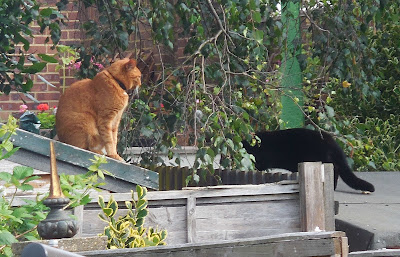