My heart was pumping, there was something about all this running around and the danger of the situation that I was finding very exhilarating. I was doing my best not to get to caught up in the drama, I never imagined life could be like this when I first came to live in the the peace and quiet of my home in Catworld.

There strolling bold and strong was Purlean's secret weapon, The Darling, Darling.

Purlean ran up to him and whispered something in his ear, he looked at her and smiled. None of the residents of Troubledom had noticed, they were too busy berating and shouting at Ursa, who was standing still smiling at the hullabaloo around her.

He put his little hand up to his mouth "Shh, just watch."

The Darling, Darling sat down as Purlean started to walk towards the crowd. When she was a few meters from the edge of the throng she called out;

"People of Troubledom, I have a proposal for you."

One of the few ladies in the town heard her and turned around.

"Hey look, it's the Witches Familiar come back to rescue her." Her voice was loud and a few people around her started to turn and laugh.

Purlean continued on, confident and proud, the crowd parting as she walked towards Ursa, now looking in her direction and smiling even wider.

"What harm will it do to hear me out?" She called above the mocking of the crowd.

"Ah what harm will it do?" One of the men nearest Ursa mocked as he bend down and picked up a stone, throwing it in Purlean's direction.

I looked quickly between Purlean, to make sure she was OK, The Darling, Darling who was now standing but still not moving and Ursa, a glint of anger flashing across her face.

"Why doesn't Ursa do something, call the Dragon or something?" I urged The Fly.

"She can't." He replied. "Look at the ground beneath her, they've laid a circle of salt all around her. A circle of salt protects, at the moment Ursa is powerless."

I gasped and turned back to see Purlean now just a few meters from Ursa, standing on top of a pile of disgarded tomoto boxes.

"I have a question for you." Purlean looked one of the men direct in his eye.

"What if I could free you? Free you from your purgatory, would that be something you would be interested in?"

Boo's and gears came back, a few of the crowd laughed.

"What can you do little cat?" One of the women laughed.

"You would be surprised." Purleans eyes flashed green.

A man in the crowd pushed through to the front and raised his arms to silence the crowd.

"What do you know of my son?" The crowd, still making some noise began to quieten.

"Lionel Free," She called out into the crowd, "Your mother, she misses you. Ever since your brother died she's fended for herself and she's frail, the fields are no easy place for her anymore, wouldn't you like to be able to return home to help her?"

A face in the crowd changed, lost in thought.

"Maisie Thribble," Purlean scanned the crowd, a lady moved forward, "You are here an innocent woman, we both know it, set up by your sister so she could steal your husband, your children, your life but no way of proving it, wouldn't you like to get your life back"

By now the crowd was silent.

"How do you know these things?" Tom Widdleson asked.

I turned to The Fly who smiled at me and nodded towards The Darling, Darling "Well travelled that one."

"I am the Witches Familiar," Purlean bellowed, "And I know much, included a way for you all to return home, back to your lives, your wives and husbands, children and parents. A way for this living hell to be over;"

"Hey you," she nodded to another of the men, "You could start your journey this very afternoon, wouldn't you like that?"

"I simply need two things to make this happen." No one in the crowd was mocking anymore.

"How can we trust you?" Tom replied.

Purlean turned and faced him square in the eye.

"You and I both know that Ursa here cannot escape the circle of salt and she has no power, no magic while trapped in it, leave her there until I prove myself, we all know it can only be undone by those that did it."

She leaned in closer to him, "How do I know I can trust you to clear it after I've freed you? I don't, but I do have belief that you will. If I'm willing to take that chance, I think it's only fair that you are too! and I promise you on the name of a Witches Familiar Ursa shall not harm any of you"

Purlean faced the crowd again, "Go talk, discuss, make up your minds and let me know, your decision.

"I want to go home." One of the children cried out.

"Don't trust her," called another man.

The crowd started getting restless, calling yes and no until Tom stood up.

"A vote, a vote that's what we shall have, a majority wins, no question. I've been here for years, this is my home now, I'd settled on that, but it's not the home my heart cries for. I never dreamed I could return to my family but now I've been given even the slightest hope that I can, it's something the very blood in my veins is urging. So I say yes, let's give this Witches Familiar a YES and if she lies what have we lost? Hope that has been around for just a minute, but if she's telling the truth just think, what then!"

Tom started to move to the left of Purlean, "Anyone that's with me, then come stand by me. Anyone against, move to the other side. The we shall see and a decision shall be made."

I was engrossed, a bowl of popcorn would have been a nice edition.

People moved back and forth as the crowd talked and urged each other, moving to the left and right of Purlean.

"It's decided!" Tom turned to Purlean, "And if you are lying, I shall kill you myself."

Purlean smiled and turned to face The Darling, Darling who came running up and positioned herself over Purleans back.

With that she bent down slightly, closed her eyes and quickly lifted her back up touching The Darling, Darling.

The air around The Darling, Darling wobbled, like ripples through the water when a stone breaks it's surface, extending outwards, faster and faster.

I turned to The Fly eyes wide open before rapidly turning back to the crowd, now hugging each other, tears falling from the face of some, laughter coming from the throats of others.

"You are now all free to go home, purgatory done!" Purlean called out.

Tom stepped forward and kicked a hole in the circle of salt, "Go fetch the Ruby of Mar," He said to the man next to him, "We're going home!"

"What just happened?" The Fly was grinning.

"Purlean used magic and her secret weapon, love. The love of The Darling, Darling, total, pure love, amplified to everyone here, she's cleansed them all, they are now all free of hurt and anger and hate, free to allow themselves to lead a love filled life, a kind life, cured so they are all free to go home again."

I kissed The Fly, "I think a little of that love magic has touched me too."

He smiled back, "You had enough already." and gave me a little kiss on my cheek.

"Now come, we must hurry, time is running out!" 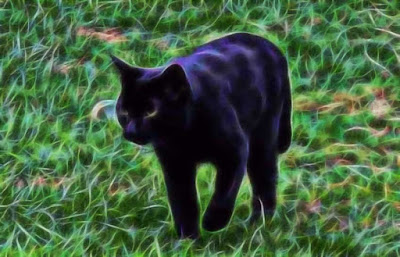