The Time Has Come - The Coven of 3

In amongst all the chaos lay Purlean, short deep breaths, a softened painting.

Leopold's face was a mixture of scared rigid and full-on wonderment. Ursa was fussing with Bob by the fire, cursing under her breath that she couldn't use her magic here and get the fire going and the water boiling.

The Darling, Darling lay nearby, facing Purlean smiling, not a shadow of worry on his face.

I turned to The Fly, also beaming, before turning back to see Purlean prop herself up on one side, almost sitting upright.

She turned to Leopold and smiled. Ursa began to move closer, Bob holding on to her robe trail. Purlean smiled at Ursa and put a paw out towards her;

She turned to Leopold, her eyes telling him not to worry.

"The time has come."

At exactly that moment a rustling in the trees behind me drew everyone s attention. The sound getting nearer. Ursa had taken a step closer, squinting to see if she could make out where the noise was originating from. Bob still holding onto her tightened his grip a little more and The Darling, Darling and Purlean looked at each other and both smiled, sharing a moment they both understood.

The fronds to my right suddenly parted and out of the wood came the coloured air I'd seen earlier on when we were running from Troubledom.

"Magic?!" I looked at The Fly who nodded back towards Purlean. The wood magic passing through her, invigorating and shining, everything frozen in slow motion. The magic brushed past the damp and into the wood on the other side, everyone's eyes following it, a slight grimace on Ursa's face.

A slight cry and we all looked back to Purlean for there in front of her lay three pure black kittens, wriggling like little fat worms.

Purlean turned back to Leopold now moving forward a look of astonishment on his face.

"The time has come." She repeated and nodded down smiling at the three kittens.

They both turned back to Purlean and Leopold forming a circle around them.

The Fly nudged me. "You see what you see there?"

"The birth of your fore-parents, all black cats are descendants from these babies, oh yes and you've just witnessed the casting of the first cat protection magic spell. Why do you think cat's don't like to cross a circle drawn around them, it takes them away from the protection of those that love them most and when you are in that space no cats can ever be hurt. A wise lesson to take note of David-Shiro, you never know when it may come in handy!"

"Ahhh!" I nodded and took note this was mind blowing, WOW black cat magic in action. I'm so lucky! 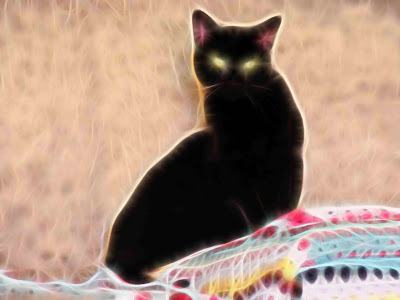