Have You Ever Had A Dream You Just Can't Quite Remember?

Have you ever had a dream that you just can't quite remember? I had one of those last night.

It was a late one, my Daddies went out to see their aunt for her birthday and got back rather late. Nanny and granddad came down to look after us both. I don't really need looking after, unlike River, but I like to let them think that they are taking care of me, cats are independent.

When they came back everyone talked for ages and then when nanny and granddad went home the Daddies sat down to watch a TV show they like about aliens and some Doctor and his friend. I don't usually join them but I'd missed them so sat down to watch it with them, all very sad what happened to the lady in the show but Daddy said he was sure she'd be OK in the end.

We all then went to bed and that's when this weird dream began. As I say I couldn't remember most of it when I woke up this morning, no matter how hard I tried.

It started off with everything being in the dark, and the sound of lots of cats wailing and calling out. I think I was trying to see them in the darkness but I couldn't, then I was in a room with lots of doors and a cat sitting under a bench looking back at me and smiling, but it felt like I was on an alien world somewhere, it was very different to this world and my dream ended with a pair of green eyes staring at me out of the darkness, the most emerald green I think I've ever seen and another cat laughing and joking somewhere as the sound of thunder rolled overhead and then a bright light. I think it was at this point that I woke up.

I've been trying all morning to piece it together but the more I think about it the more it just fades.

I'm putting it down to watching that weird show last night just before I went to bed, although something inside me is niggling away, the green eyes are especially jumping out at me, it was a strong image, maybe because that's the colour of my eyes now, although they used to be brown. Oh I don't know I just wish I could remember it all, it's bugging me like when you read a book, an Agatha Christie and then at the time of the reveal all of a sudden realise you've missed something that's been glaringly obvious all the way along. 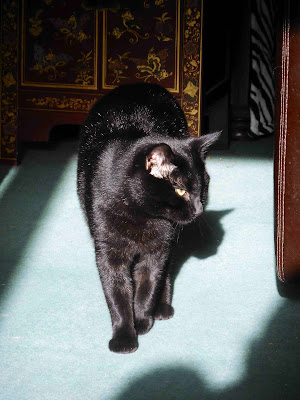