No Worries On That Score!

There' been another sighting of Foxy Lectar last night and this time by me.

I was sitting having a cuddle with Daddy in the chair in the window, he was watching some dross on the TV and I was looking out the window at the rain when there over the other side of the road, just for a second, I caught sight of him running under a car.

My heart was pounding, it's one thing to hear tales about him and to see his vandalism of the lawn but it's another thing entirely to see him for my own eyes.

I've been waiting all day for someone to be around so I could get the message out but the rain's been keeping everyone in until just ow when Mogsie made an appearance.

He said he would spread the word and that I should not under any circumstances approach him. No worries on that score! 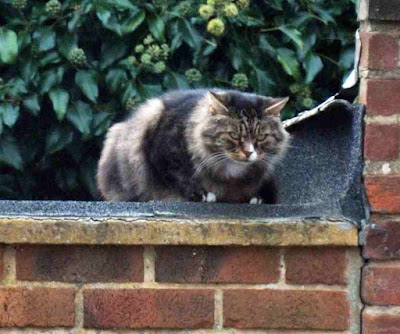