New Kids On The Block

I was glad that it was a usual Saturday, River and Daddy sleeping in, as it meant that I got time alone downstairs just chilling and doing what I felt like, eating and padding Daddy and most importantly getting the opportunity to finally have a decent conversation with Theo.

He said he was just on his morning constitutional when he bumped into George who told him that I'd been wanting to speak to him for a while. 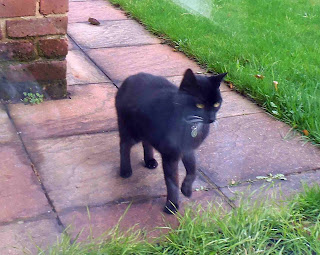 He was a little cautious at first, I guess that's the case being one of the new kids on the block, even though he's lived here for a while now, he seems the shy type.
I wasn't sure how to begin, my story seemed a little out there, well not my story the story of Purlean and The Coven of 3 and how Catworld needed his help.

I started to talk to him about what I had experienced, his eyes staring at me, a mixture of disbelief and trepidation. I wasn't sure whether I was explaining it properly as he didn't say anything, nothing being given away by the look in his face.

I just got to the point where we were about to go overseas when I heard the door upstairs and River came running down. I couldn't risk him being scared away by her happy greetings which I know for sure she would have given if she had seen him so I told him I thought it best for us to get together again soon and I could tell him how it finished and he nodded, still saying nothing, and off he went, head down, maybe deep in thought.

Time for River now, she's just woken up and I can tell from the look in her eye she wants playtime. Thinking about it I guess it was a good time for a break in the story, it's a long one and the weirdest part of it, well that was coming and I didn't want to overwhelm him.

Still at least first contacts now been made. 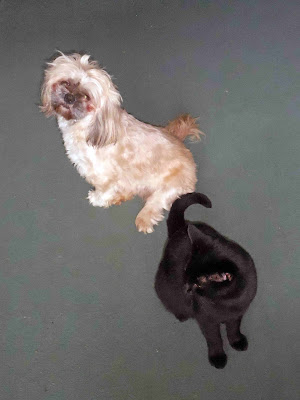 Cats and Dogs - Another Side
www.riverssong.net/2015/11/discovered.html