Up and down, down and up the stairs I've been all day.

It all started first thing, I was on the table having some breakfast when I spotted Flash in the garden. Brazen he was walking up with a confident swagger straight towards the backdoor.

My back went up as I froze on the spot ready to jump on him if he entered and it really looked like it would.

Boldly headbutting the backdoor flap which thankfully Daddy had locked both ways last night and forgotten to open it first thing.

Thank goodness River was still upstairs, the noise would have got her running to see what happened and even from this side of the door I wouldn't want her anywhere near that bad-un!

"My treasures!" He yelled through the flap. "I told you I wanted MY TREASURES! I'll be back later, you can't think you can get away with this!"

The bastard! Who does he think he is?

Of course I've been on high alert, double thank goodness it's pouring down, no way would River be let out and very unlikely he'll be coming by as it's so wet, I don't mind the rain at all but I'm the exception rather than the rule when it comes to cats.

No sign of Mogsie either, I've been keeping an eye out for him too. 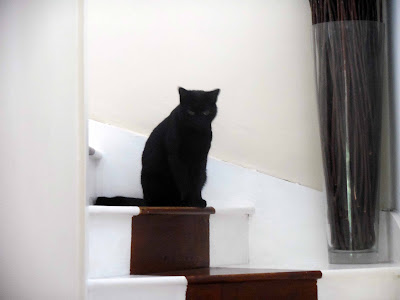