Let's Play Him At His Own Game

Finally George has turned up.

I was sitting in the window waiting for lunch to be served up, everyone else was cuddled up on the sofa, they had a late night last night and were all very tired, when there he appeared on the tree stump.

Luckily it's a fairly warm day, for the time of year, so the window was open so I could call out over the road to him.

A big smile came back, oh how I was about to turn his day upside down.

After exchanging a hello I jumped straight in and told him all about Flash's visitation, sneaking around. I could tell from the look on his face he was taking what I said very seriously, occasionally nodding as I explained everything.

When I finished he bowed his head, deep in thought. I sat there waiting not wanting to break his concentration, finally he spoke.

That much previous tale had informed.

"But do keep a very close watch on his actions. I want to know what he's up to but I don't want him to know."

I nodded and George smiled. 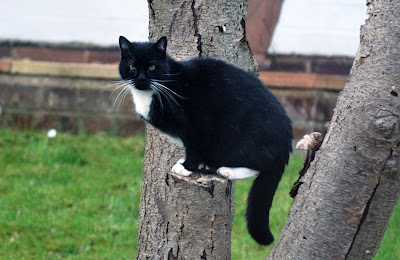