"Three days! Three days? What on earth did you do in that time?" Theo looked surprised. "There's no way I could have kept still for that long."

I smiled back and pushed a Dreamies out of the window.

"It wasn't easy but I'm had plenty of practise sitting very still and not being noticed, I do live with a dog you know."

"Oh yes," I knocked another Dreamies out of the window and Theo popped it in his mouth. "She's lovely but sometimes you just wanna sit in peace and that's a rarity around here."

Theo nodded, "I can image. So what did you do?"

"I listened to their general chit chat, it's fabulous people watching. Bob can really talk, it doesn't really matter to him if anyone's listening he just gets lost in his own world. I heard all about his travels, as did The Darling Darling who I learnt is a surprisingly good listener and according to the general consensus she can do some amazing things with a pile of tofu and fresh berries."

"Um, I love berries." Theo licked his lips and eyed my Dreamies pile, subtle! I knocked a third out of the window.

"Leopold was also a quiet one, preferring to spend his time following Purlean around and playing with his kids but the biggest surprise was Ursa."

"She wasn't as much of a ogre as I first thought. Yes she as a bit of a grumbler and spent half the time wandering around kicking things and barking orders but it didn't seem to bother the others much they just did what they wanted to but every now and then she would sit down next to Purlean and just stroked her. The love in her eyes was obvious, love seeping out not afraid to show it's face and Purlean well she was in ecstasy rubbing her head again Ursa's legs hen she was having a particularly unproductive rant. They were the strangest of best friends."

"You sound like you liked her?" Theo looked quizzical.

"After three days of just watching I must admit I think I understood her a bit more. It couldn't have been nice to have been scorned and accused of being a witch by her villagers. OK it is what she became but what came first the chicken or the egg?"

"Never mind, I guess it wasn't all her own fault what she became although it didn't soften me enough to change my plans. No she had to be stopped and I guess I was the only one now The Fly had disappeared, to be able to do it, Catkind depended on it!" 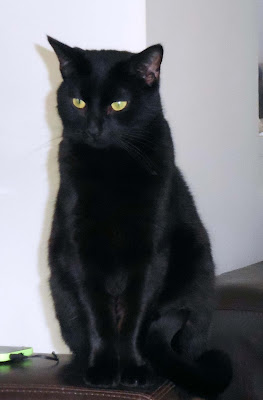