Squashed Under A Chair

I've been so sleepy all day today. I think it started when River came bounding into me first thing begging me to play with her. 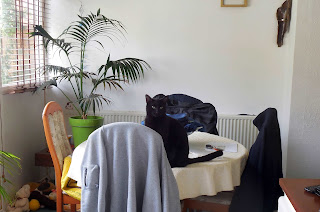 I wasn't ready to get up and managed to persuade her to have a little sleep with me but every time I began to drop back off to sleep she would snore really loudly and woke me up again. I must admit I was quiet glad when she got up and said she was going downstairs. 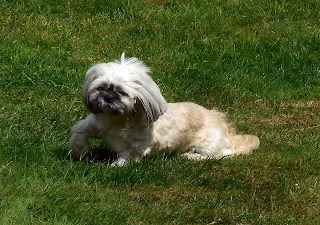 I told her I'd join her soon but I needed just a little more time. I think I had about another hour before I ventured downstairs. It was very quiet down there. River was outside watching Puppynap with his garden revamp that he's been working at all week.
I felt a bit bad putting her off earlier so decided to join them both and suggested we have a bit of a cuddle under the chair in the shade, it's another hot day today. 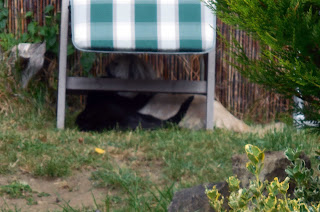 It doesn't take long to get hot when your squashed under a chair with a fluffy ball of River laying on you. 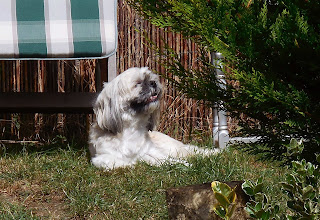 I decided to leave her to pant away laying in the sun.
And went inside to get some more sleep. 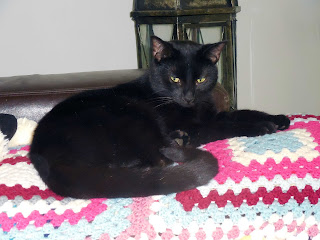 I had a lovely dream about Sofia, I've not seen her again since the other day when she dashed across the back fence. In my dream we were sharing some Dreamies and I must admit to it being quiet romantic, I was just about to go in for a kiss when River jumped up and woke me up. 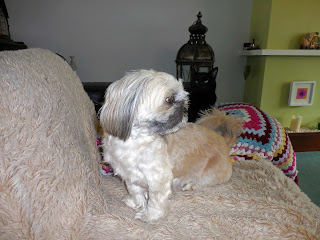 She wanted to cuddle up but I was in a slightly miffed mood at being woken up from such a great dream and said there wasn't room. I know it wasn't very nice as soon as I said it so I suggested she lay close and we could play later. 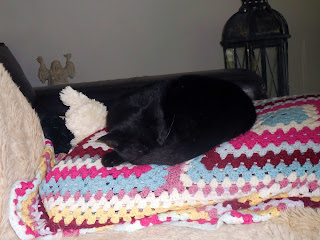 I then went back to sleep to try and get back to the place in my dream that I was at before.
I didn't manage it! 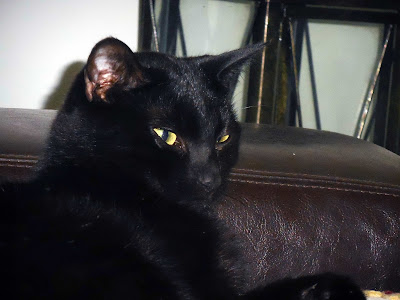 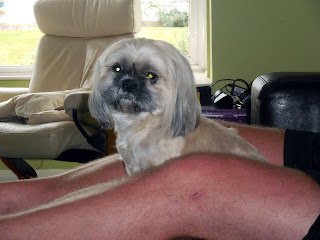 And to top it all off as soon as I woke back up again River was there watching me waiting to play but I was still in a bit of a miffed mood and said later. 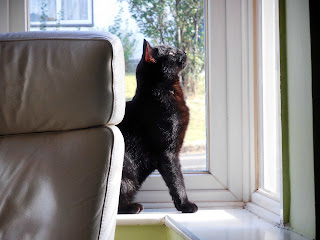 I went to look out the window to see if I could see Sofia, dream eh get in your head and distorted reality, of course she wouldn't just be walking by at the moment I looked out the window so I decided to see if I could see any of these shooting stars Daddy has been going on about, I could do with having a wish come true. But of course it's daylight so no chance of catching sight of one, I'll try again later. 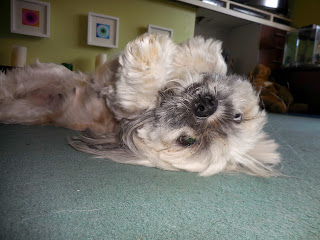 I then went to see if River wanted to play, I was still feeling guilty for shrugging her off earlier but she was busy playing with Daddy.

So I moved myself to the table to watch them. Also it's a great place to see out both the front and the back. Still no sign of Sofia though. 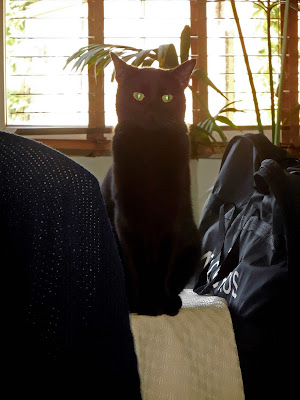 I must have got lost in my thought as somehow River and Daddy had both passed me and gone outside ad were running around playing. I actually felt a bit jealous and then a bit ashamed at myself for how I'd been towards River today. I know we're all entitled to some time on our own occasionally but she only wants to be around me so much because she loves me and you can never have enough of that in your life.

I thought I'd make it up to her though when she came back in and invented a brand new game.

What you do is hide under the sofa and when you hear River about gently call to her in a very quiet whisper. When she heads your way you go very still and very quiet so she doesn't know where you are.

When she does find you, which she did, you then encourage her to get under the sofa with you and then we can both play a trick on the Daddies and pretend neither of us were here. It's not quiet hide and seek more hide and seek from the grownups. She'll love this game and maybe I can make some amends for my dismissive mood today. 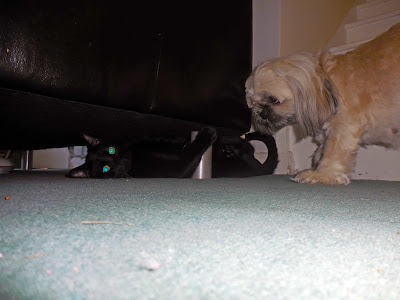 Cats and Dogs - Another Side
www.riverssong.net/2016/08/i-bet-if-i-squeeze-myself-very-small.html