I've just seen Chameleon, it's not often that he comes over this way, not this close anyway.

Daddy was working and River asleep my his feet and I was sitting on the window ledge looking out to see if I could see either George or Mogsie when I spotted him.

I called out the window, luckily very slightly open to say hi to him. He didn't look up say said hello and that he had been tasked with morning patrols through Catworld.


No further word on Foxy Lectar but he said George and Mogsie were concerned, they knew what this buried treasures thing was that he was going on about and they would let me know later but that I must be very alert, it was a serious situation. 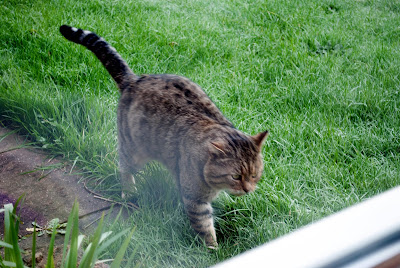