Two Things He Needed To Speak To Me About

George has just popped by, he said there were two things he needed to speak to me about.

First he wanted to know if we were all OK after the big wind storm last night. It was a wild one, I even heard my daddies talking it about it in bed last night, thankfully everything was OK when we woke up this morning, just a little bit of litter strewn across the back garden.

The second was to inform me that there was to be a cat council meeting sometime in the next couple of days, and I needed to attend. Although Foxy Lectar hasn't been seen during the day there was some digging up marks on our front garden, George and Mogie had seen them when they got up this morning.

I said I'd not seen hide nor hare of him since he'd told me he was coming for the treasures but that didn't mean that he'd disappeared. If anything he was becoming more audacious! 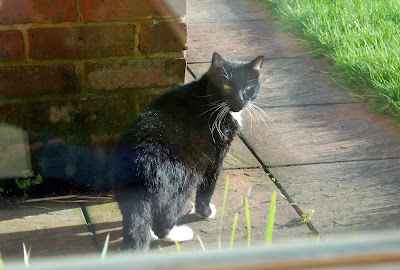