The Daddies have taken River out for a ride, Daddy is getting used to driving now he's passed his driving test and they are always out. Still it gives me plenty of time on my own to just do my thing and my thing this afternoon was to have a little stroll around the back garden.

I was having a little sniff up by The Wiseman when all of a sudden from behind me;

I turned around, eyes darting from left to right but I couldn't see anything.

There hiding in amongst some of the bushes I saw a rather pretty little cat looking back at me.

"What you doing in my garden?" I was a little surprised at the audacity of coming in uninvited, although I must admit to doing the same to others myself.

""Quick come here." She whispered, "I don't have much time."

I quickly ran over.

"Who are you?" I'd never seen her before.

I shook my head.

"He's white and tortoise shelled coloured, he said he came over a while ago, you may remember."

I scanned my memory, yes a vague recollection came to mind of the cat that just sat at the back of the garden staring at me.

"Yes, I think I know who you are talking about." I sat down opposite her, not relaxed but not threatening either.

"I haven't got much time, I'm taking a great risk coming here during the daylight but I needed to speak to you."

"You are in great danger."

The fir on the back of my neck stood up, my leg muscles tensed ready to pounce.

"Milo has been bullied by Flash to join his gang. It's not something he wants to do but there's a fox and he's petrified of foxes who's also in the gang."

"No." Sofia shook her head, "Although they are threatening him and he's going along with it to protect me, sexist bunch don't want a girl in the gang not that I want to be a part of their rubbish but they've said to Milo they'll come after me unless he does what they say."

I was beginning to feel a bit sorry for her. I was lucky I was under the protection of Catworld and had some good friends around here looking out for me but they seemed a bit out on their own.

"The thing is Milo overheard them and they say you owe them something and they've waited long enough for you to part with it."

"Yes," I interrupted, "I know what you are taking about."

"Milo wanted to warn you they are planning a raid or something, he's very scared but too scared of them to not go along with their plan."

"Do you know when?" I moved a little closer, she had lovely eyes and I wanted a closer look.

"No," She shook her head, "but he doesn't think it's too far away, the fox has been snooping around the past few nights."

I haven't seen him." I replied. Sofia just looked back.

"I'm sorry I don't have any more details and I can't stay long, you never know who's watching."

"Thank you for letting me know, is there anything I can do to help you?"

I wasn't sure if I noticed a slight watering of her eye or not but I couldn't stop looking at them.

"Make all this go away." She smiled. I smiled back.

"There's other cats around her who can help you, we look out for each other around here."

A sadness spread across her face.

"The last person who tried to help me and Milo recently, well..." she bent her head down, "Well I've not seen him since."

My ears pricked up. I felt a little sick again.

"Doublay he was called. He was nice."

OMG it was only at that moment that I realised I hadn't seen him for a while, not since he agreed to try and infiltrate The New Cat Crew.

"What happened to him?" I stood up.

"I don't know. Chameleon caught him and Milo talking and I've not seen him since."

Sofia looked around nervously, "I thought I'd better let you know but I can't hang around, we could be being watched and I don't want to put Milo in any more peril."

"I understand," I said, "Listen I'll walk off and if anyone is watching us they'll probably carry on watching me and then when you think the coast is clear go up there that way past Squirrel Tree."

Sofia nodded and I got up and started to walk away back to the house, I must tell Mogsie and George as soon as I could find them.

I turned to look back at Sofia. "Thank you." I smiled.

She smiled back and ducked her head down back into the bush. She sure did have a pretty smile too. 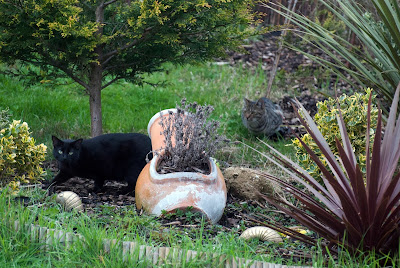