Wishful thinking is a good thing but sometimes it can lead us down a path of fantasy, and that's where I think I became a bit relaxed and didn't expect what's just happened.

I was downstairs on the table amid the bric-a-brac eating my dentastix when an eerie feeling came over me. I don't know why but I guess that's the magic of being a cat our sixth sense is heightened above that of the usual person.

Looking out the window, the dew glistening on the grass reflecting diamonds of light into my eyes I was temporarily blinded but there out of the edge of my sight I defiantly saw something moving in the garden just past where the washing was hanging.

The fir on my back stood to attention, ears straining to catch the slightest unexpected sound the soft crunch of slightly frozen grass bending alerted me to an intruder.

I knew it wasn't River mucking around I can hear her upstairs snoring and Daddy was pottering about up there. Moving to get a better position out of the sunlights glare every fibre in my body froze as there creeping under the washing I saw him, Flash making his way slowly up the garden towards the backdoor.

I jumped down and moved as silently as I could towards the door, pausing just out of sight on the inside. A slight knock on the door flap, luckily it was locked and couldn't be moved. Another tap of a nose from the other side before a voice began to whisper through the gap,

"Period of mourning over, I know you are there listening little cat and I meant what I said, I WANT THE BURIED TREASURES!" Each word punctuated with venom.

A slight giggle followed, my heart pounding I moved from one foot to another to edge just a millimetre closer but still remaining out of sight.

"TOMORROW!" A final bang on the door flap and he was off.

I must go find Mogsie, this was to close to home for comfort. 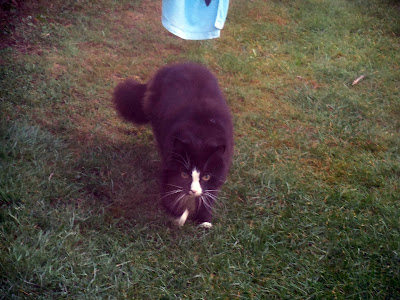