Curiosity Is Not Just A Cat Curse You Know

"Blimey I wouldn't want to catch her on a bad day." Christmas Peacock! addressed one of the cats now gently touching the now stone cat.

She turned to Ursa, "You're vicious!"

Ursa smiled and nodded. "If you want my help," she turned to Purlean, "and let's face it I'm the only one here that could possibly help her." turning back to Christmas "you'd better spit it out, I was in the middle of things."

"Yes middle of a massacre by the look of it." Christmas spat back, "What on earth happened in your life to make you such a bitch?"

Christmas smiled, "I don't, not in the slightest but as we're here chewing the cud..."

Without pausing and drawing attention to herself she tossed a small piece of paper on the floor next to the cat who had been looking after Ursa's first victim on the day. It didn't go unnoticed and the cat quickly scooped it up and opened it, careful not t get detected.

"ENOUGH of this nonsense!" Ursa screamed.

"I agree, " Christmas replied, "you see I also am in a hurry and this is all becoming very confusing. Now what was it I needed help with." she tapped the top of her head.

Meanwhile the cat had passed the note back to another cat at the edge of the crowd who looked down, took a read and passed it back.

"Oh yes, " Christmas took a couple of steps closer to Ursa, "I'm.. oh honey have you never heard of Peppermint, it's a great breath neutraliser." She put a paw over her nose and took a step to her left.

I turned to The Fly, "She's distracting Ursa's attention isn't she."

The Fly nodded back, "Clever isn't she."

"But how come Ursa hasn't put some sort of a spell on her?"

"Curiosity is not just a cat curse you know."

Ursa was smiling again. "You really have a way with words."

"I thank you." Christmas bowed, looked behind her, caught a glimpse from one of the cat that had read the notelet, who quickly nodded to her and poked a finger behind her. Christmas smiled and turned back to Ursa. Taking another step closer to her.

"Oh yes, that's right. I'm on the run and need you to help me hide.

"On the run." She took a step closer to Christmas, "Who from?"

Christmas sat down on a rock, took a handkerchief from her pocket, blew her nose, returned it to the said pocket and patted the stone next to her indicated to Ursa to take a seat.

"What would you prefer, the short or long version?" 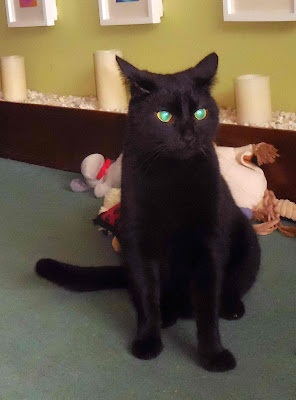