There I was side by side with The Fly, leaves on bushes and twigs on sticks snapping and opening as we made our way through the undergrowth towards the edge of the woodland around the edge of Parsnip Valley.

To my left to valley continued to dip down, a hill on the opposite side and valley floor was filled with cats, mottled and in varying states of attire, robes caps next to bear feet and bowed legs. The noise of their chattering a banging cacophony not single sentence unmuzzled. Cats turned and swung between conversations, constantly shifting positions, heckles and ganders up high.

To my right the valley rose to a peak and over the edge the trees on the top hung with flags stood Ursa, Leopold, Purlean, their children, The Darling, Darling and Bob.

Ursa proud and upright leering down, hair now slightly matted, Leopold stood in front of the children but a way back under the tree, safe distance. The children had grown a lot in the last month and although now still very small they were certainly stronger.

Bob fussed over a campfire he was attempting to make, flint on flint does not always produce a spark, especially at the top of a windy valley and the breath of thousands of cats hissing curses in the same direction.

The Daring, Darling sat next to Bob, by the look of her she didn't know whether to stay back safe from immediate peril or run down and lick all the cats in the valley until they gave in and loved her. For the moment she remained with Bob.

In the gap between them little bright lights like electric sparks whizzed around and disappeared.  turned to The Fly.

"What on earth is that?" My head jabbed towards the sparks.

"Tension in the air!" The Fly replied not turning away from something he was intent n looking for on the other side of the clearing. Finally he waved and turned to me.

"As I say tension in the air. It always looks like that. When you feel it it's there it's just it can't always be seen but this place..." he paused his face screwing up and taking a sharp intake of breath through his bottom lip for dramatic purpose, "...is something else!"

I just shook my head. Give me strength.

"Hang on." I suddenly remembered something. "Who did you just wave at?"

The Fly buzzed and sat on my nose. "Myself, I'm over there." He nodded towards a tree branch on the other side.

My head began to turn when a gasp from the cat gathering became a singing chorus. Ah the Cat Information Network, alive and strong even then. I turned to look in the direction drawing attention, the sky had turned dark but the sun was still out. A large sound of thuds and whooshes gathered volume on the other side of the valley tip, just out of sight.

Ursa turned away from the crowd following their gaze.

"On a previous tour. I always promised myself I would say hello to me, when the time came." The Fly ignoring the unfolding commotion.

The Fly laughed. "That's one of my earlier tours, look over there just passed me, another me a previous me waving at you and laughing over their, up on the branch behind. Can you see it, that little bit of grey? "

I peered my eyes following his directions. Yes there I could see something. I nodded.

"That was a lovely cat I brought on the tour way back, years ago. Smokey, lovely fellow. Anyway waiting for the beginning, much like we are now, back then I made a promise to myself to wave at myself from across the field, when the opportunity presented itself, to me, and I knew I had because as soon as I thought it and looked up there I was waving at me. I just had to make sure I did it which of course I had and it just today, turns out is the day, we're at exactly the right spot. Get it?"

All this Time Consciousness stuff can play games with your sanity.

The crowd were no longer in stunned silence, gasps and cries and noise had begun screams threading through.

I stared at them the fear in their eyes, some ready to fight some already given up.

I turned to the top of the valley and their stood the Red Dragon, now thrice the size it was last time we had seen him. The scales blood red, wings retracted tips sharp and glistening. A revolting stench avalanced itself down the valley each time he breathed out a grin of evil on his face, his eyes searching the crowd when eye caught his tongue menacingly poked.

Ursa stepped up and tickled his chin, ecstasy coursing through her veins.

She went to open her mouth and at that exact moment everyone as one turned to look towards the
middle of the field.

That gap in-between the two sides was now filled by an out of breath and slightly dishevelled cat running noisily through, arms in the air waving about from left to right.

She suddenly stopped, took two deep breaths, turned to her left, to her right and then straight at me and winked before turning and bowed to both sides.

"Hello, I'm Christmas Peacock! I need your help!" She turned to face us again winked, bowed, clutched her stomach and promptly passed out. 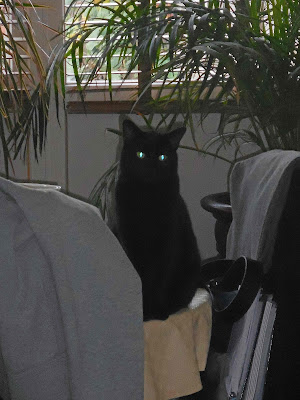