Tear Of Mirth Dropped From Her Chin

I thought Ursa was going to implode with rage but it just goes to show witches are a different breed. She opened her mouth and cackled, her head flying back the cackle merged to a roar. Tears of mirth dropped from her chin. The dragon next to her retracted his wings and sat back down.

A few of the cats also started to laugh, the atmosphere felt less charged and more positive, the tension disappearing.

"Oh," she whipped a droplet from her nose, "it's been absolutely ages since I've laughed like that. I'm having so much fun and in a minute I'm going to take the remaining crystal, obliterate you all," she pointed to Christmas Peacock!, "maybe not you I have a vacancy for a court jester and I think you'll fit the bill perfectly and exact complete revenge on that bunch of villagers before taking over the world."

She clapped her hands, "Yes today is turning out to be a fabulous day indeed."

She took a few more steps down the hill. "Now who," she address the crowd "is claiming to manage this bunch of moggies."

The crowd gasped, the atmosphere of 30 seconds ago was long gone.

"I," a cat, a grey version of George stepped forward. "am the local elder, so you might like to look on me as..."

Before he could finish Ursa nodded at him, raised her hand and pointed her finger in his direction mumbling something under her breath. A flash of light filled the air above everyone turned to look the light bleaching everything in a white light, gone in a flash a lady screamed.

The elder man still there was not moving, his grey hair now grey stone.

Some of the crowd let out moans and cries, when one cat passes all cats mourn, a few fled into the woods where we were hiding but most just stood there staring unable to comprehend what had just taken place.

"Now," she turned to Christmas Peacock! "You said you could do with some help. I'm curious. what do you need help with, I've always been nosey!" A crooked smile spread across her face. 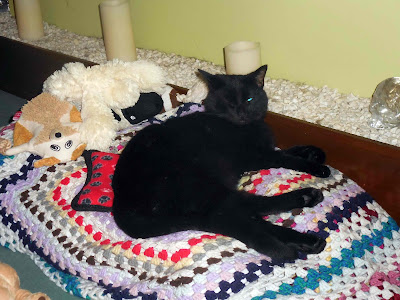