The Fly flew off, rapidly buzzing and jumping from our hiding place and quickly back into the wood, for is was at this point a wood and not a forest, but I was learning not to forget an enchanted forest and enchanted wood, just a few trees be-twixed them.

I rand really hard after The Fly as he found a break in the houses flying and gliding like a Star Wars pilot, pretty impressive, I struggled to keep up, so intent on not losing hi this maze that I didn't have time to worry about if I was spotted or not. Near up I could have sworn I saw another flash of cat fur following what I was presuming was The Fly on a previous or future tour. I was getting used to how this place operated and I wondered what was next.

Into the wood The Fly flew ever faster than he'd ever flown before and I was keeping up, not even thinking, at that time, that maybe I should have looked behind to see if anyone was after us but no I just didn't dare lose The Fly.

The wood became a blur of green plant merging with green plant an emerald sparkling back, almost like I was flying I hit nothing and nothing hit me, maybe this is what flying feels like, gliding effortlessly the only thing in focus The Fly.

Then quick in a blink there I was still and sitting right in front of me eye line level The Fly drinking thirstily from a big yellow Daisy, licking his lips at the nectar.

The Fly grinned back; "Magic's fabulous isn't it!"

I lent forward and kissed him on his little top head. 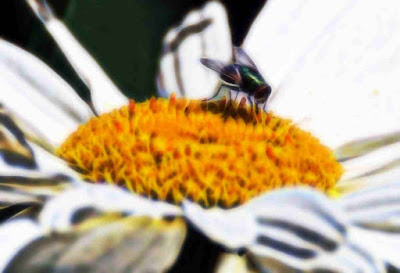