My Timeline Was Now Interfering With The Past

I wasn't sure what I should do, stay or run, The Fly had warned me very clearly to be careful of being seen or getting involved, this may already all of happened in the past but for me it was also very real and very current. My timeline was now interfering with the past and the consequences I just didn't want to think about but I was here and in this position and I had to deal with it.

"Hello," i said and stepped forward offering out a paw, "I'm David. David-Shiro."

Purlean smiled and took my hand, a spark like I've seen Daddy get when he doesn't turn of an appliance before pulling out a plug shot between us, it didn't hurt though, just a slither of purple beauty. Purlean laughed.

"Nice to meet you David-Shiro, fine name that."

"Are you OK?" She asked again.

"Yes," I replied "but I'm not too sure of my friend." I looked down at The Fly, I could see his chest moving up and down softly.

"He'll be OK, I think I must have collided with him when I came through."

"Are you from around here?" Purlean sat down.

"No." I shock my head, "I'm, I'm..." I wasn't sure how to answer, I didn't want to give anything away and wasn't sure that I should even be speaking to her but I guessed if I gave nothing away it couldn't be too bad.

"I'm from a long way away, I'm not familiar with this part of the world, The Fly here was my guide, I'm on a tour."

"Are you OK?" I asked looking down at the large stomach hoping that all the excitement of the day hadn't brought on an early birth, "You look like you were in a hurry."

"Yes I'm fine now. A friend of mine has been in a spot of bother and we got separated and to be honest I think I'm a bit lost."

Purlean nodded but didn't answer, her eyes squinted and she looked at me intently. Although you can't see when a cat sweats I certainly was, I felt very much under scrutiny, I hoped there was nothing in my accent or demeanour that was giving me away. Thinking quickly on my feet;

"You said you're friend was in a bit of bother?"

Purlean licked her paw and cleaned a spot of dirt from the top of her head.

"Yes, she has a habit of getting into trouble." She sighed.

"Why do you stick with her then?"

Purlean glanced at me and I wasn't sure if I'd offended her but within a second her stance settled back down again.

"The thing is she looks out for me. She looked out for me when no one else would and..." she paused to take stock, "And as much as I needed her, she needs me, she's just not fully aware of it yet."

I jumped on the answer, forgetting myself, "Not fully aware of it yet?"

"She's not a bad person, she's just lost her way and I'm trying to help her find herself again."

I pushed forward a berry that lay near me, maybe Purlean was hungry and I certainly wanted to engage her in conversation.

Purlean shook her head and pushed it back towards me. I was feeling rather hungry and decided that I would partake.

"I've never seen another black cat before, I thought I was the only one." Purlean sniffed in my direction.

Suddenly i felt panicky, of course Purlean was the first created by magic and here I was sitting right in front of her chewing the cud not even considering that to her I was as much as a curiosity and she was to me.

Thinking quickly on my feet. "And you're the first I've seen." Which wasn't strictly true, there was Doublay and Theo from back home and of course I'd seen pictures of Evie that Daddy had up but I had to be careful what I said.

Purlean suddenly got up and started to walk around me, looking me up and down. Oh my what had I done, The Fly told me to keep my wits about me and now here I was feeling under inspection by the first ever Witches Familiar.

"Anyway I had better get back to my friend. It was nice meeting you and I hope your friend wakes up soon."

"Er yes you too." I replied. "I hope everything's OK when you find her again."

"Thank you." Purlean walked towards the middle of the clearing.

"I think you came from that way." I said, pointing behind her wishing she'd just go really quickly and I didn't make anything worse than I already had.

Purlean suddenly stared at me, eye to eye, beyond the iris.

"Oh don't you worry David-Shiro I know exactly which way I'm heading but I need my transport."

"Transport?" What on earth could she be talking about.

"My transport." Purlean nodded down again to a twig in front of her.

I stared at her suddenly becoming very scared, the look she was giving me was unnerving.

Purlean straddled the stick and the two of them lifted up in the air.

"My transport!" she laughed.

"You and me David-Shiro, you and me, I've got a feeling we may well meet again someday and then you can tell me who you really are!"

In a flash she was gone, back through the bushes. I jumped up on the rock she had been sitting on to see if I could see her but no she was gone.

"So." A voice behind me echoed around the clearing, "Did you keep your wits about you?" I ran over and kissed The Fly. I was so glad he was awake again! 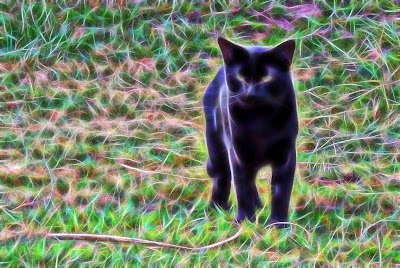