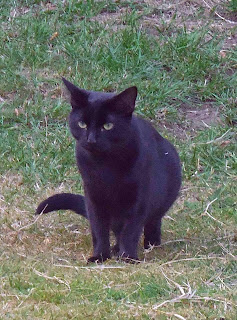 Well there I was just having a little sit in the sun when all of a sudden I heard some rustling in the tree. 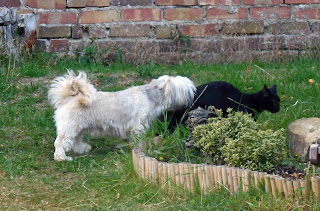 I went to investigate to see if it was Craig, but by the time I got there the rustling had gone, but I'm sure I caught a glimpse of Ginger cat jumping through the trees in the next door neighbours garden.

Feeling a little dejected, I so want to say hello to him, I went back into the garden to try and see if I could get his scent but before I could pick much up I felt River's nose up my bottom, there was something very important she needed me to see she said and she was so persistant that I knew if I didn't humour her she wouldn't give up. 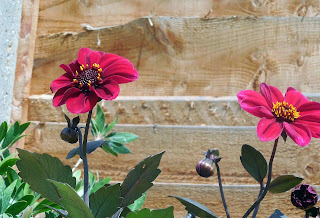 Yes lovely some flowers, but is that what she was really disturbing me for? 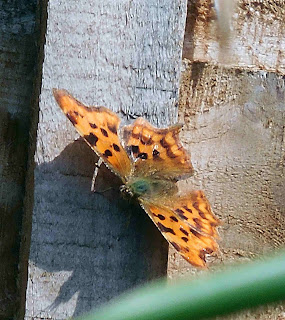 Well I never, it wasn't the flowers she wanted to show me if was the beautiful butterfly that was buzzing around right besides them.

I've seen some white butterflies before but never an orange one. I was tempted to play chase with it but I've overheard Daddy saying before that butterflies are magical and so I just sat there and watched it with River for a while.

As much as I would have liked to have stayed there watching it I did have ore pressing matters and jumped back into the tree, leaving River to stare alone, and tried to pick up on Ginger cats scent. I guess I must have dropped off, it's the heat it makes us cats very tired you know, as when I woke Up I could here the Daddies talking to a lady in the back garden, they were all having drinks and laughing.

Ahh that must be Daddies cousing I've heard him talk about.

Full of energy after me sleep I jumped down to ask River is she fancied having a play but she said she was all played out. 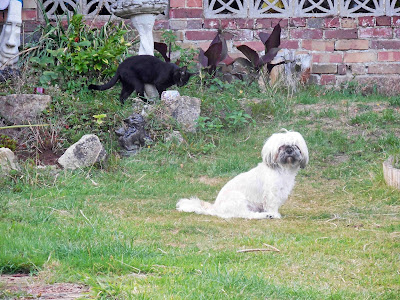 Cats and Dogs - Another Side
www.riverssong.net/2015/08/i-suddenly-saw-something.html