What An Adventure I've Just Had - I've Never Turned Left Before! A Blue Water Hit

What an adventure I've just had. I was sitting up in the Peace Garden just chilling and thinking when all of a sudden a rustling up in Squirrel Tree directly above me drew my attention and although I couldn't be sure a flash of ginger disappeared through the leaves.

Could it be Ginger Cat, I really want to speak to him, there's something I need to ask him. 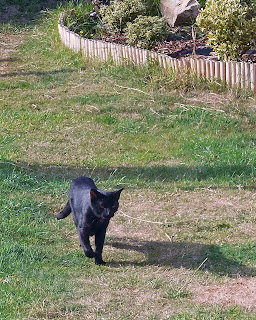 For a while I paced up and down the garden. Yes I could have gone straight after him but also I'm not that sure what he might be like with me. I've heard good things and that he's a friend of Catworld but still I've not been formally introduced and he's never stuck around to say hi so who knows.

In the end I thought, I;d never know unless I approach him and so jumped right up and through the leaves in the direction that the flash of ginger colour went.

Looking around I was in the garden the other side of the wall, a garden I've not gone to before. I've explored all the gardens at the back and to the right but I've never turned left before!

It's a pretty garden, lots of trees and bushes and things and a nice bit of grass. Looking around I couldn't see Ginger Cat so I turned to return and brushed against something in the tree.

As you can imagine, I jumped nearly out of my cat skin right up and banged a branch above me, leaped to the right in surprise and half fell out of the tree.

On the ground I ran half way up the garden panting. I needed a water hit, a blue water hit to calm myself down. So desperate I was that I jumped up on the side of the summer pool and nearly fell in. 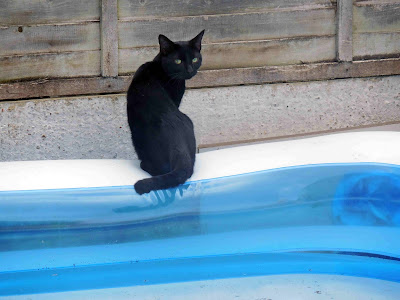