Daddy has just told me the most extraordinary story. He's been upstairs all day with River, yes River was allowed in the office all day. I think it was because she was bugging me this morning and I didn't fancy going up in the office so he took her there.

Even though I didn't want to go in I wasn't too sure how I felt about River taking me spot but I guess as long as it's not an everyday occurrence I can live with it. 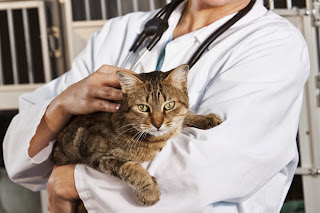 Anyway when he came down I think he wanted to make it up to me and so he told me a story that he'd read today. There was this cat called Hades and his family was invaded me a very dangerous spider. What did that brave cat do, well he only took it on to protect his family. He did get bit which wasn't a great state of affairs and he was very ill for two days until he got all better. Daddy showed me a picture of him, must say not too different looking from me, maybe he's a distant relation?

Thank goodness he's OK and I've never heard of a cat being attacked by a spider before but as for the bravery of a cat, that doesn't surprise me, it's amazing what we are capable of when cornered! 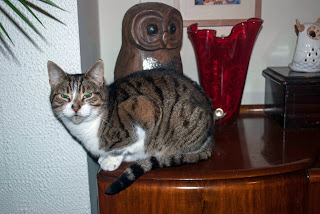