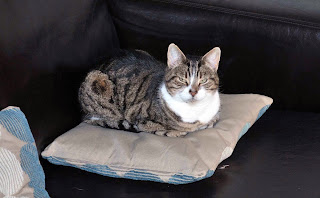 Word has spread about Flash lurking around. I was just having an afternoon rest downstairs, River was out the back as Daddy was cooking us our tea so I'd been left in peace.

The view from the sofa is perfect I can see straight outside and over the other side of the road so it was easy for me to spot Mogsie when he appeared. 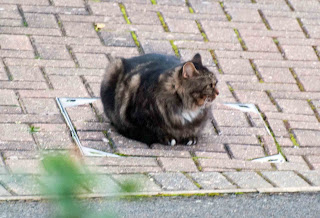 Luckily as Daddy is cooking the window is open so it was easy for me to call over to him asking if he'd heard, which of course he had, not much escapes our Mogsie.

He said he wasn't too concerned, he'd taken on bigger and stronger, yes and looked what happened last time, but he was keeping alert.

Daddy then called out that the chicken was ready so I was off safe in the knowledge that both sides of the road are under watch, he won't be able to sneak in undetected a second time.