Talk About Feelings And All That

Well that was nice.

I met Mogsie out the back where he was already waiting, he's a very fast runner you know he'd somehow gotten out there quicker that I had, maybe he was keen, I certainly hoped so.

I didn't want to go into things too much, you know talk about feelings and all that, although I did want to know. As much as I've said to myself no mucking around this time you've got to pick your moment otherwise you can make things more difficult than they need to be.

I asked how his tail was now and he said everything was better now, which is a big relief.

I asked if there had been any more developments concerning Flash and he said that although things were still quiet that he thinks it best if we move things to amber and make sure that we are all as visible as possible. I agreed.

We then went for a bit of a walk all the way over the back wall, over C's, along the boundary of George's and then back down the side of our house. It's perfect weather for a bit of a Sunday morning stroll, the sun is shining and it's so lovely when it hits you as it has been so cold this week. 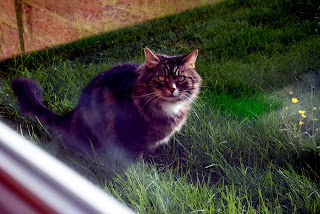 When we got around the side we just sat there is silence for a while, it was one of those times when you can just enjoy each others company in silence. The clouds started coming over and a few drops of rain came down and I was beginning to think it was time to go in and then the Daddymummy drew up in her car so that confirmed it was time to go so I bade him goodbye.

There was then one of those awkward moments when you don't know if you should kiss goodbye or not, in the end we just smiled and in I ran.

When I went to the front window he was sitting there just looking at me. Swoon

I also spotted the lighter Naughty Twin running home from in the rain, now today she's looking pregnant, oh it's a conundrum. Is she? Isn't she? I need to catch her to ask. 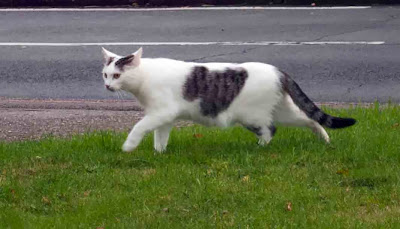