With That He Was Off!

I could hardly believe my eyes earlier. I was up on the table, the sun is beautiful today, skies of blue an the noise level at a minimum so I was loving the atmosphere then out of the corner of my eye I saw Mogsie jumping down from the back fence, head over to the garage and jump through the gap in the lower part of the door, over the twigs Daddy has put there to prevent River from going in until he repairs it.
I immediately followed him, what on earth could he want in our garage. When I got there he was sitting looking at the door way. 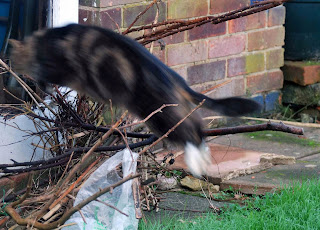 I was expecting you, he said
My first thought was presumptuous, but then I saw the seriousness in his face

Doublays been spotted in the district.

I just looked at Mogsie

I've been over to see Ginger Cat, he's heard rumours that Flash has been putting pressure to re-form The New Cat Crew and they've been looking to recruit new members and I believe he;s been leaning on Doublay. There's no news on Chameleon though , Spit's one of us now so his loyalty is not in question.

OK, what do you want me to do? I asked

Just keep an eye out, the Naughty Twins have your place covered from their side of the road, I'd appreciate you keeping a look out over the back of yours. Sarah is also doing the rounds but we're trying to keep it low key, we don't want them to cotton on that we're on to them.

With that he was off!