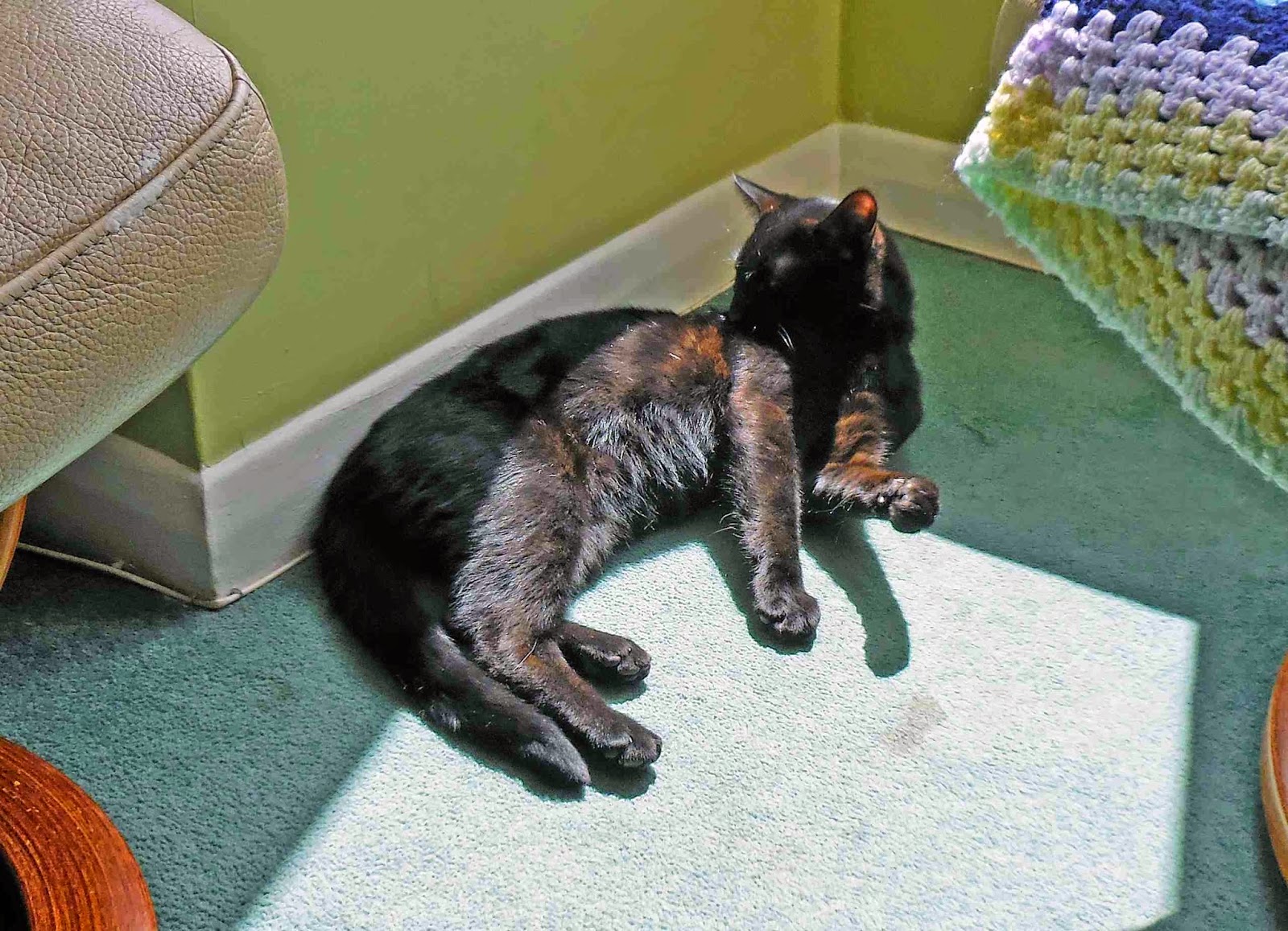 I'm exhausted, it's been a busy night I've not been to sleep yet but I'm enjoying having a little lay down in the sun shining through the window, thoughts of a very strange night and morning going through my mind.

It turns out there's an advantage to being naughty and waking everyone up at 4am and being shut out of the bedroom at night, I have free reign of the house at night.

Usual time everyone went to bed, kisses and strokes a-plenty and then all alone. I nervously approached the backdoor flap not knowing for sure if I'd be able to get out or not, Daddy usually locks it after 9 to make sure River doesn't run out and start barking.

I tapped the flap, it was locked as usual but I could see it wasn't full blocked, if I knocked it hard enough I was pretty sure I could bypass the blocking thing. I tapped it, yes it moved slightly but not enough. I needed more force behind it but I didn't want to wake anyone up, Daddy is a light sleeper.

Again I knocked it, no movement.

I could see Craig burying something in the lawn, he was true to his word, waiting as he said, to help me. The knocking hadn't caught his attention so I guess I wasn't making too much of a noise so I knocked the flap again, this time with all my might. A loud crack n the flap made me jump and run back into the kitchen, I'd scared myself, I'd made such a noise. Had I woken anyone?

I waited a minute or so, no noise coming from upstairs, I was OK no one was awake, and then I gingerly approached the flap and gave it a slight tap with my paw, it swung open.

Phew I'd done it, as quick as a flash I was out and into the garden. It was very windy out, it had been all day and it had still not settled down as night had fallen.

Craig was looking my way and I ran over to him, it was night and night does not scare me.

"Hello." I was nervous and excited and so glad to see Craig.

"Hang on a second." Craig flicked a little bit of dirt with his paw, "Just covering my tracks, I don't want that Fox finding my stash of monkey nuts. Right you ready then?"

Oh I was ready alright a cocktail of strange emotions playing havoc in my stomach, no idea what the night would bring,

"What direction are we heading in?" I'd never been out of the garden before, apart from when my Daddies first brought me here.

"Not far, follow me." And Craig was off, jumping his way up towards the back of the garden.

With not a moment to lose I chased after him, if we were going over the wall I didn't want to lose sight of him for even a second.

Craig stopped in the Peace Garden, not my favourite place in the world, and turned to face me not saying a word. I waited for him to jump up on top of the wall by the Swinging Heart of Love but he just stayed there.

Maybe he was catching his breath, all that jumping must have tired him out? We just stayed still in silence, in the end it got too much, it was so windy and I'm sure I could feel rain in the air so I was keen to get on.

"What are you waiting for?" I eventually asked.

"Listen for what?" I was very confused.

A deep voice behind me began to speak. "If one listens to oneself, one can hear all manner of things."

I nearly jumped out of my fur. Looking around I couldn't see anyone. I turned to face Craig who was smiling at me, not in the slightest bit afraid.

"Who are you?" My head turned left, to right and back again, again I saw no one.

"Who are you?" I repeated the question.

Again I scanned the Peace Garden, I could see no one.

"Don't worry," Craig moved closer, "I've brought you to see a friend, a friend who can help you more than anyone else can, there's nothing to fear."

Craig moved away from the back wall, passed the Easter Island Head and pointed towards the old Chinese statue.

"Hello, little one." Again that deep voice all around me, "I am The Wiseman, at your service!"