Off To See Some Old Friends

"You see, " said Greego, "I haven't always lived around here, oh no I've been all over the world on my magic carpet but those pesky Fairyville Fairies hid it from me when they dropped me off here. I've been stuck in that room for ages up on that shelf ever since your father found me in the garden."

I licked a paw, wow Greego was a Pixie of the world, I'd only ever been to a couple of places, where I was born, here, and to the Doctors. I knew the world existed, I'd heard my Daddies talking about different places they wanted to go to, it all sounded very exciting.

"and stuck me up on that shelf!" He didn't sound like he'd gotten over it completely yet but I didn't want to interrupt trying to defend them, I'm sure they were only doing what they thought was a good thing.

My magic carpet can take me anywhere I want but the only thing is, until my punishment is lifted by The High Council of the Pixals, I have to return within the week to where I was last dropped off, your Peace Garden, or in the near vicinity, also I've grown quiet attached to the coming and going on's in this place."

"So where did you go?" Greego looked at me a little annoyed. 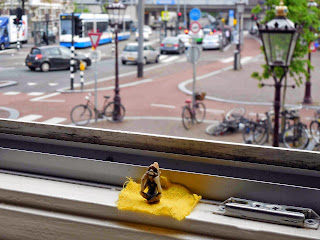 "I was off to see some old friends, over the water and in the clouds, to the other side of the ocean and through the rainbow. You see my magic carpet doesn't just fly in distance, it can fly through to the other reality, my reality. Humans think they can see and know everything that's going on but they miss so much going about the daily lives, not even seeing what's right under their noses, and that's where I went, through the rainbow, to the land of bicycles."

"As I said I wanted to go see some of my old friends, the Merrymaking Dwarfs." 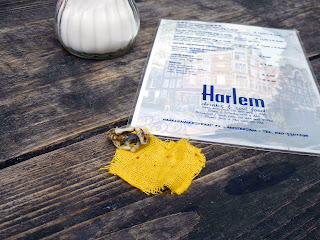 "Ah it was such fun, they really know how to party. Up all night we were, they were so glad to see me. Great drop of ale they can make and the songs, oh the songs, we danced and made merry all night. Killer handover the next morning, I had to sneak onto someone's breakfast table to pinch a little bit of bread to soak it all up. Us Pixie's don't need to eat you know, we don't mind the odd bit of food occasionally, if the fancy takes but as a general rule we don't partake, but ale and rum, now that's a different story!"


"I then spent the next day trying to track down me old mucker FancyPants, a mean tune he plays you know, I didn't want the party to stop but I couldn't find him anywhere. Up and down the canals and waterways I went, up and down, side to side, nowhere to be seen was he so off I trotted to see Makerlise, a distance cousin of mine who I could just smell was around." 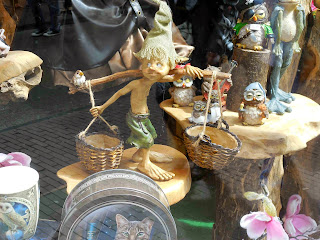 I shifted my weight, drawing closer to Greego, he didn't seem quiet so jolly anymore and I didn't want to miss a word.

"He's a right stinker he is, but as I found a bit down on his luck, stuck, trapped in a window carrying water, which I know not why as he's never washed to my knowledge."

"Blow me down you could have. I asked him what had happened and he said he'd also been punished my the High Council of the Pixals, for some misdemeanour no doubt, you see he's a little, err, how shall I put this, light fingered. He can't help himself, in his DNA, probably got caught stealing salt, he's got a taste for it but I don't know he wouldn't talk much about it, the owls next to him were too busy eavesdropping and there's something I know about an owl, they are very, very noisy, never miss a thing!" 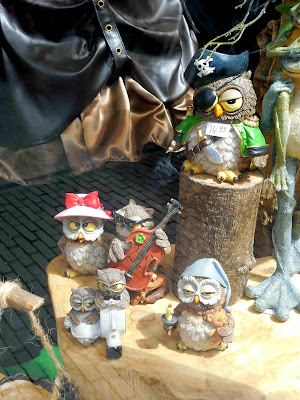 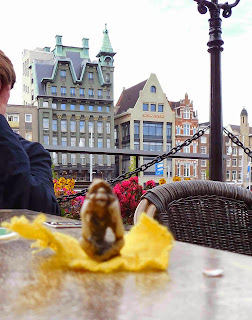 "I tried to tell them not to be so noisy but they just squawked at me and the one on the Cello started playing the most awful tune that my poor ears just couldn't take anymore so I bade Makerlise adieu and went off to think where I could go next to try and find FancyPants, the main reason I flew through the rainbow."

"I was just sitting there, wondering what to do, feeling a bit fed up if I'm honest, this travelling malarkey can take it out of you, when all of a sudden I heard a voice coming from the wall above me. Blow me down, how did he get up there, my old friend and sometimes sparing partner Potpot."

"Fed up stuck on this wall Greego, what you doing here, last I heard you were in punishment? He said." 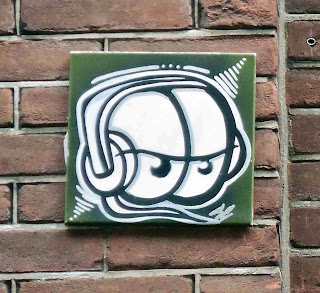 "I still am, I laughed, but you know me, never down for long. Have you seen FancyPants? I've looked all over for him?" 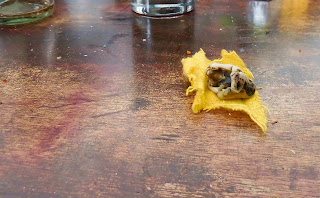 "Ok, don't think I asked that question but thanks for the info. I said to him, although I did laugh so hard I fell over and spent the next three minutes in convulsions, he always did have the ability to make me laugh. Ahh bless old Potpot."

"I asked him how he'd ended up on the wall by the water, apparently some tourists had thought it funny to take him down from his spot near the park and try and take him home, got themselves a bit worried as they neared the station and dumped him on the floor, where he'd been found by one of the waiters from the cafe and super glued back up. All very undignified, still it was another friend ticked off the list, it really was a fabulous visit I was having, seeing so many old faces."

Greego turned to me raised an eye as if to say why are you speaking, before putting a finger to his mouth.

"Shhhh! The best bit is yet to come."

He had my attention before, now he really had it. 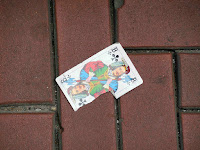 "You cat's are not the only creatures with special intuitive powers you know. Whenever a Pixie doesn't know what to do we simply look down, the answer if we really are stuck will be in right in front of our feet and it was, there right in front of me a sign."

I struggled not to speak.

"As soon as I saw the card on the floor below me I knew where I had to go, even though she wasn't on my list, I must admit I was trying to avoid her we'd had a little alteration last time I was here, such a misunderstanding such a fuss over a doughnut and a bit of a boating mishap, anyway that's another story and not at all relevant to this one." 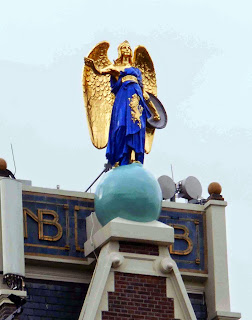 "Whom who did you have to go to see?" I'd forgotten I shouldn't speak and so must have Greego as he continued without reprimand.

"The Angel of Gold and Blue! She sits up high watching us all, making sure we are OK, protecting us. The sign was clear, if I was to find my old friend FancyPants then I would have to go and see her. I was a little nervous as I approached, I wasn't sure if she was still angry with me or not but she appeared pleased to see me. She always had a lovely smile."

"Hello your highness, I need a little favour. I wasn't sure how she'd react, such a long time since we'd seen each other and now here I was wanting a favour."

I was surprised at how Greego's tone changed as he spoke about her, he obviously held her in awe and with respect, something I'd never seen in him before.

"I'm searching for FancyPants, have you seen him?"

Greego was on a roll and leaped into the air before landing cross legged back in the same position.

"Greego, you want to know where your friend is, yet you come to me for what? Answers? You know what to do. The Angel of Gold and Blue said."

Greego turned back to me. 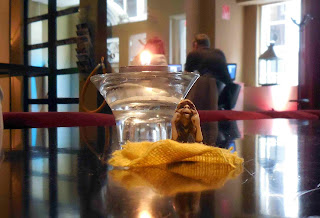 "I did, I must admit I was in a hurry though. it's the frustrating thing with these Angels Yes, yes they can give you answers but like The Wiseman they prefer to help you find them yourself, which is OK in itself but sometimes can really take some time and I didn't have all week, I knew I had to come back here or my carpet would not just be hidden, it would disappear for good for ever, the curse of the Pixie's, so many disappearing curses put upon us."

Greego sighed "Still we all have a load to bear."

"I bowed to our highness and apologised for my previous mischieviousness. I needed to find a quiet place to reflect, to listen to myself."

"After about an hour sitting and contemplating I had it, an image in my mind, an image of Popeye."

"Popeye!" I was so surprised I wasn't expecting that.

"Yes Popeye, the character, you know, the human invention, Popeye! I then knew I needed to fly around and find Popeye and when I did, which I did, I understood totally where I would find my friend FancyPants."

"Where? WHERE?" Greego had sucked me into his drama.

Greego leaned in towards me, "Look into my eyes."

I thought he was going to hypnotise me or something but no, there in his eye I could see an image."

"But how?" I stood back from Greego before moving in for a second look. There again exactly the same image.

"I don't know," Greego shrugged his shoulders "But there right in front of me was the answer, I'd been searching everywhere for FancyPants and all along I just needed to look closer to home. I guess he's on his way here, he'll turn up at some point but home is where I needed to be and home is where I am."

Greego looked me right in the eye and laughed, "Just like you, back home again." 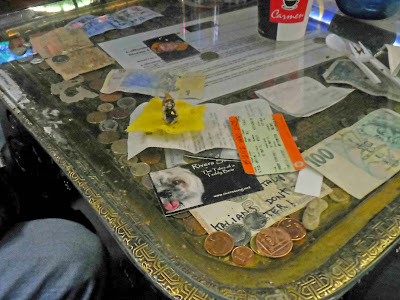