"I'll make a trade with you Greego." Greego looked at me and smiled, he was sitting on the table near the back door, the place with the best view over all the garden.

"A trade?" This time his face could be read so easily, a star sparkled in his eye, it was working I'd got his attention.

"Yes that's right, a trade." I sat and licked my paw, I didn't want to rush I wanted to build up a sense of anticipation.

"You tell me what you mean when you said earlier gotcha and I'll tell you a secret."

His mind was working overtime, weighing up the pros and cons or entering into such a deal. I knew Pixie's couldn't lie so I knew if he just accepted the trade I'd get my honest answer. To win with Greego I was learning you just had to tempt him and what's more tempting than the promise of a secret being revealed.

"What's this secret about?" His neck stretched like Nadia's moving his face a centimetre nearer to mind.

"Now that's a secret." I teased, I was having fun with this and could see he was trying to trick me into revealing before he made the agreement and was bound in to tell the truth.

"How will I know if it's worth such a trade?" He was really trying , OK this was turning out like a game of chess.

I looked his straight in the eye with the most serious face I could muster.

Greego thought for a couple of moments, whatever he meant by gotcha he didn't want to reveal readily. I could sense tension in the air, a ticking mind clock but would be gamble.

Greego then turned to me and smiled.

"I have a counter offer for you." Ok this really was turning into a game of chess.

"If you can solve a riddle I put to you then I will accept your offer and hear your secret and tell you what I mean, if however you get the answer wrong, then I'll just hear your secret and keep mine to myself. If you don't want to accept that's fine then we'll leave it for today and both enjoy the weekend. The choice is yours." Greego smiled and rubbed his hand across his chin.

Damn he'd turned the table and put the ball back in my court, now it was my turn to make a decision. How much did I want to know what he meant? Obviously a lot or I wouldn't have been spending all this time trying to outwit him when he'd managed to do it to me quiet easily. I had a lot to learn when it came to dealing with Pixie's.

I guess I had nothing to lose, I'd managed to solve his riddles before, the odds were stacked in my favour if we went by the past.

"Is there a time limit? I mean can I go away and think about it for a while?"

Great just the answer I was hoping for, if I was going to take him up on his challenge I didn't want to rush an answer I really wanted to make sure I had a good one. I turned to Greego and nodded.

Greego sat back and giggled.

WHAT! Oh my head. 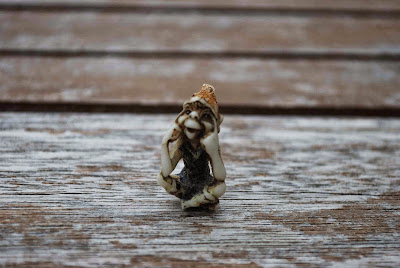