Catworld Needs To Be On High Alert

I jumped up in the window, that's where the voice was coming from and there was George sitting looking up.

"Hello, George, how are you? I'm glad you've dropped by I've been wanting to speak to you."

George shifted from side to side, I could see he looked anxious.

"I'm doing fine thanks, hope you're OK I've come to warn you."

My ears pricked up.

"Yes," George began, "Warn you of a terrible danger that's been seen lurking around."

"Yes, there's been a sighting the past couple of nights of an old enemy of Catworld lurking around. A fox, a very dangerous creature, not to be trusted."

I interrupted, "I thought for a moment you was going to say it was something to do with that strange cat I've seen lurking around."

George suddenly sat up. "What does this cat look like?"

"Black and white, quiet large from what I can gather, I couldn't see him too well, just his head poking over the fence the other day. I've been keeping a look out for him since but I've not spotted him." 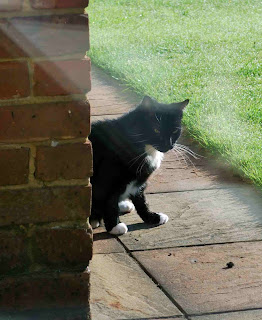 George looked deep in thought.
"Anything else about this cat that you remember, I know most cats around here."

I thought for a moment trying to remember anything else distinctive about him.

"This is even more worrying than I thought, did he have a white streak across his nose?"

"Oh no, having Foxy Lectar back on the scene was one thing but to have his old pall back again as well as the same time, cannot be a coincidence. Do not and I repeat, do not approach either of them. They are both old adversaries of Catworld, they're bad on their own but together well that can only mean one thing."

"What's that?" I was feeling very worried, George's tone was not one I was used to.

"They are working together again and Catworld needs to be on high alert!" 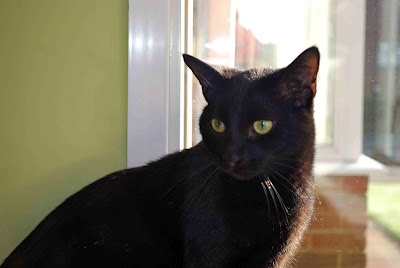