I must have ran for about 10 minutes as I was back deep in forest territory but I could hear The Fly following me, his buzz seemed louder than usual as he speed to keep up.

"I told you today you would taste your own magic." The Fly puffed as he sat on a daisy leaf catching his breath.

I turned back, looking in the direction of the glade clearing although of course I couldn't see it, I'd run too far and the bush was too thick.

"But what I mean is I didn't mean for that to happen, Purlean and the rest couldn't see me."

"And?" The Fly looked at my quizzically but I wasn't about to say anything to break the silence and him avoid answering my question.

Finally realising that we were going to sit in silence for as long as it took he spoke;

"It's all a myth that magic needs spells and ceremonies and the like. While it's true that it can be called up that way for some, and that includes you," he pointed a wing in my direction,"have the ability to have it happen when it's needed, protection magic, just happening from nowhere," he paused, "As if by magic."

How The Fly laughed at his funny. I wasn't so amused.

"You knew that was going to happen didn't you, you've been here and seen as this before."

The fly, now drinking some water from the daisy leaf nodded.

"Oh yes, AND I know what's coming next but I'm not going to tell you, that would spoil the surprise!"

I was really beginning to think I'd had enough of all these surprises but something else within me was quite pleased, I have protection magic in me." 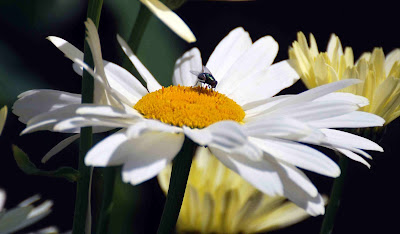