Then I Will Be Unstoppable

I had no idea how long I'd been in the water, after a few minutes I must have passed out, I think I banged my head on a rock or something, I'm not sure, everything was hazy.

"This way, come on." In my dream state I heard a voice, very vague but familiar. My eyes still closed I lay still, trying to feel myself, not sure if it was real or just my imagination playing with me.

"Hurry up!" Another voice, yes that was familiar and I opened my eyes and slowly lifted my head, that was OK, I stretched my legs, yes they were OK too.

I got up flexing my muscles and checking myself over. My fur was wet but apart from that I seemed to be OK.

Looking up I gasped.

To my right was what I presumed to be the river that had taken my hostage, calm and serene once more, diamond light from the now smiling sun, glittered as it met an expanse of ocean, the bluest blue I'd ever seen.

I appeared to be in a bit of a gully, a steep rock face hugged one side of the river and there at the top I could see Bob and Leopold. Yes that's why the voices were familiar.

I thought about running and hiding but if I made any movement I was scared I'd draw attention to myself, so I decided to stay perfectly still and watch what was going on, still no sign of The Fly, my Fly or any other Fly.

"Can't you two slow down?" Ursa rounded a corner and came into sight, a bag slung over her shoulder, three little kitten heads poking out, Purlean at her feet The Darling Darling keeping up the rank.

"It's not much further, I can hear waves." Bob excitely called out, the edge of the forest must have been blocking the sea from their view, although from my position I could see it very clearly.

I put a foot out very slowly, they were beginning to head down a rough step pathway in the rock side down into the gully and heading in roughly my direction, if I stayed here they would surely see me.

No reaction from them, so I put another foot out, still nothing, if I moved very slowly I reckoned I could hide behind a nearby rock without being spotted, from the angle that the steps would take them too, just a little nearer the sea than me.

As slow as slow can be I moved my position, ever nearer they came, Bob happily jumping from one step to another, Leopold occasionally looking back to make sure everyone was OK and following them.

"This is fabulous!" Bob had reached the bottom, taking his boots off he splashed in the rivers edge.

"Perfect to cool the feet." He laughed.

"I bet!" Ursa grumped as she gently lay the bag down and the three little kittens scattered in all direction, tumbling over each other, playing and happy as kittens like to be.

"Stay close children." Purlean called as she bent and took a drink out of the river, "And make sure you don't go near the sea, not unless someone if with you."

They nodded, playing chase in and out of the wood edge.

Ursa moved off towards the sea, not more than 15 meters away and stood staring into the distance while the rest carried on their rest.

"That," she suddenly turned back to them, "that is our destination."

Purlean was now at her feet, rubbing herself around Ursa legs in a figure of 8.

"Where's is that?" She asked, looking up, love shining from her eyes.

"England," she replied, stretching down an arm toward Purlean, who stretched up and received a stroke for her efforts.

"And the hiding place of the Emerald of Mar!" Ursa smiled, "And once I have that," Purlean looked up at her, "Then I will be unstoppable and every single person that has ever crossed me will be made to pay!"

Ursa laughed and threw her head back.

"And how do you intend to do that?" Purlean asked as she jumped up onto her shoulder her eyes flashing green.

"My idea is so simple it's genius" Ursa rubbed her neck on Purleans;

"I shall turn every single cat in the world into a witches familiar who under and awaiting my command, throughout every age and all time, will turn on human kind. I" a toothy grin spread across her face, "intend to eliminate the human race!" 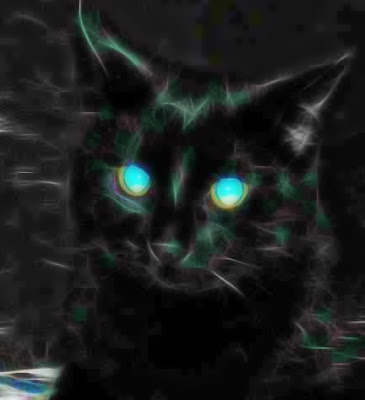