Daddy has just come running in and and woke me up to tell me the news. He'd just popped outside for a bit to break up his day and he said that he'd seen M, she was off with R and Mogsie to the Doctors for them to have another look at his tail.

He said he picked Mogsie up and he said he struggled, Mogsie is now even heavier that River! M said he was now 7 kilo's in weight because he couldn't get out and about and had put on all this weight. He's right River weighs 6.7 kilo's so Mogsie is now bigger than a dog. A dog!

Daddy said Mogsie's eyes were bright and his coat looked in lovely condition and the copne is firmly in place to stop him from tearing at his tail but said that M had said that he was now depressed at not being able to get out. The lighter Naughty Twin was hardly leaving him alone and had now taken to sleeping over there and George was not happy. Dunno why it should be such a both to him but apparently he took a swipe at the lighter Naughty Twin yesterday which he really shouldn't have done as she's pregnant again, and so by the way is Sarah, no prizes for guessing who the father is! 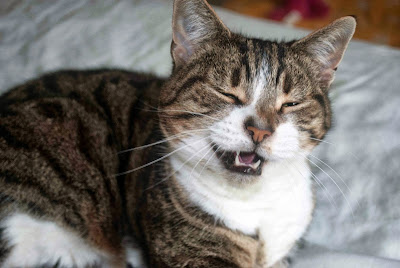