It's a lovely morning here, the sun is shining, the washings on and I'm up with Daddy in the office enjoying looking out and catching up with him and there's been a lot to catch up on.

I think it was the site of Spit sitting under R's car that got Daddy started. He's only gone and got the Naughty Twins pregnant again, well that's the rumour on the street, the darker Naughty Twin does look like her bellies swelling a little but I put it down on maybe taking a sneaky bite at some of this extra food that we've put down for Foxy but no apparently it's not all that innocent.

Talking of Foxy he also told me that M told him yesterday that there have been at least two other confirmed attacked from him, one on a cat up the back of M's and the other on a cat at the other end of the road. It seems he's now very unhinged and is attacked indiscriminately, it's all a very dangerous state of affairs I can't wait until Mogsie is better again. 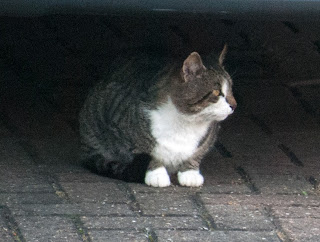 Now at last we have some very good news regarding Mogsie. Daddy said that M said that the Doctor said that he was doing well and in a week or so his dressing may be able to come off for good. His tail is now saved and is showing signs of healing properly although he's not quite there yet. He's also getting restless and wants to come out although he's not well enough yet.
Oh yes and it looks like Spit has now decided that he wants to live at M's, she said she though he may have been a stray, um that would probably explain why he fell into such bad company and joined The New Cat Crew who I must say have been keeping a very low profile recently.