A Little More Tension Than Impatience 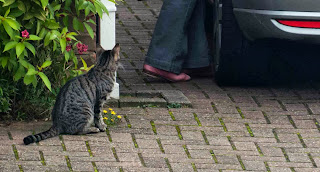 Well I've ended up sleeping most of the morning away, Daddy didn't have a very good nights sleep and was wiggling all over the place disturbing me so I needed to catch up on it. When I did eventually wake up I was surprised to find the office door open even though Daddy was working in there. 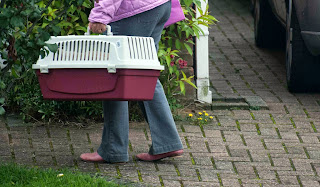 I ventured in and could see he was busy and I know what he's like when he's tired so I thought it best not to jump all over the desk and instead jumped up onto the window ledge to see what was going on out in the world today and that's when I saw that M and R had just drawn up in their car. 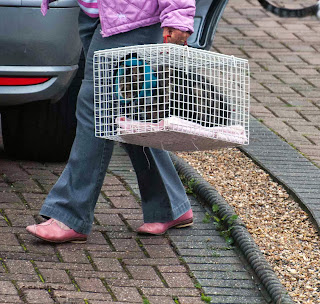 Nothing unusual in that except Sarah was waiting very anxiously for them to come out. OK it was dinnertime that could have been it but something inside my catty powers told me it was something more, maybe the way she was sitting demonstrating a little more tension than impatience.
I was right, first of all M came out with a carrier but it didn't look like the usual one Mogsie went to see the Doctors in and then she went back and got a second one, this time I could clearly see Mogsie not looking too chuffed with his neck cone still firmly in place, he must be livid.
So both Mogsie and Twizzle have been to the Doctors today, I do hope Twizzle is OK.