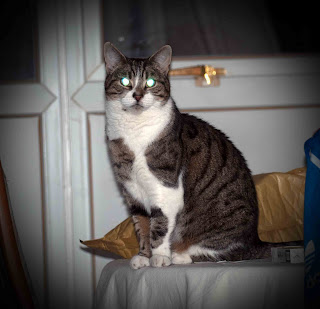 The daddies keep on reporting cold spots and blowing on their bodies and Rivers been going mad this past hour. They had to go out and get her in from going barking crazy in the garden, she even ran straight past me just now in her desperation to get out there at something. She can't get out now though they've had to block up our door with a cushion, they were mortified at the noise she made but not annoyed at her as they said she was just protecting them from something.

I thought she was off her nut when she first went out but Daddy said he heard something out there that could have been a cat or a Fox. He might be right but I'm not so sure,
both me and River keep on seeing something somewhere out of the corner of our eye at the same time, turning in unison.

There's something going on, maybe more than one thing and it's feeling all very mystical!
at 02:32