I Do Believe He's To Be Trusted Now 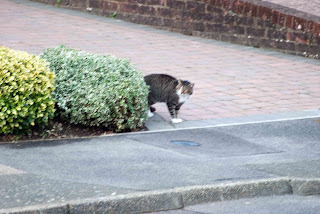 Stay Daddy has just come in after taking Disappears somewhere and when he came in asked me if I knew the little black cat who looked like Evie that was outside on the doorstep.

On the doorstep! Oh yes I know who that it, Doublay is back. I've  not seen him for ages and immediately my catty powers kicked in and told me something wasn't right. I know he left the New Cat Crew at the same time as Spit did but unlike Spit he didn't make Catworld his home after his defection.

Now I know he left that gang and he might just have found somewhere else to hang out but something was telling me to keep alert, what if word of Mogsie's incapacitation had spread and had somehow got back to Flash or Chameleon and they were going to try and take over again, I mean Foxy was doing the same even if he has seemed to move on to another district at the moment? 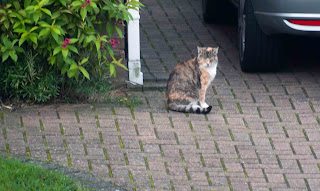 Daddy wasn't the only one who spotted him Spit and Emma where both out and although Emma did her usual and minded her own business Spit appeared to be going after Doublay. 6 months ago and I would have been very suspicious of that but now that Spit has fathered half the children around here he's got a stake in the place so I do believe he's to be trusted now but I'm still going to be keeping my own eye out for Doublay myself.