His Eyes Twinkled A Thousand Lights

"Quick sit here next to me." The Fly had settled on a big green palm leaf, his wings were still moving rapidly, as he gestated to a small clearing in the back of a bush just below him.

"They'll be here any moment, remember be quiet and just watch, should they know you are here?"

I thought it a bit of a strange question but then again nothing appeared as I thought it was, the more that time went on the more things became stranger than my imagination could form. Without thinking I followed his request and sat down, the small shinny leaves capeing my body, obscuring me from view.

I could here the breaking twigs footsteps getting closer, one firm the next slightly dragged, followed by the soft pad of four paws, Purlene.

To my right I heard a buzzing, my instincts sharpened my fur bristled and my ears went up, muscles taught ready or action.

"What do you mean it's just you?" I looked at him still on the leaf, yet the buzzing was still going on where it had first drawn my attention, although it had got slightly quieter.

"It's me, I'm there with someone else, being their guide." He spoke without turning in my direction.

"Oh quick a good it coming up, they'll be here in seconds and you'll get your first proper look, I always love seeing people's faces at that moment."

"What you mean you're here and there both at the same time? And you're there with someone else."

The Fly broke his gaze for a second. "Exactly, remember time is alive and if it's alive it's breathing in and out, back and forth. Now." he nodded back towards the edge of the pathway by the clearing.

"Here they come." A smile spreading across his face, he nodded for me to follow his nod.

The bushes parted and an old woman covered in tore and ages clothes came hobbling through but I wasn't paying much attention for there abut a meter behind her, just inches from the ground a pair of eyes shone the brightest green I'd ever seen, the leaves parted and there sitting on the ground, proud and strong I caught my first sight of Purlean, the original witches familiar!

My eyes glowed green, strickling it's warmth throughout my body, warm and comforting. I turned to face The Fly who was looking at me and smiling.

"Never fails, that look, every time!" His eyes twinkled a thousand lights as he gestated back towards the now cross legged sitting witch and Purlean, licking up some water trapped in a large red ball like flower, a foot in front of her.

"Now watch, thing's are about to get interesting!" 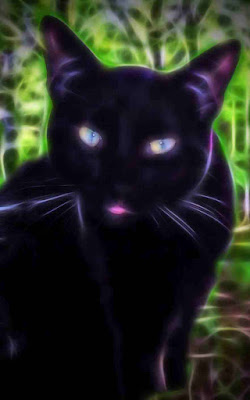