It All Began On The Day Of The Summer Solstice

"OK," Mogsie said, his eyes portraying a sense of serious resignation. He'd been over the road doing his cat yoga when he spotted me at the front window.

"OK I'll tell you everything, everything that Troy told me about The Coven of 3. Who am I after all, to hold back knowledge that may be of use to you, I tried to keep you Theo and Doublay from meeting but that turned out to be exactly what you need to do."

I was surprised at how Mogsie was being, like he was tired of bearing such weights of responsibility on his shoulders all on his own, a new-found feeling towards him was growing in me, I wanted to give him a hug but it didn't seem appropriate.

"It's strange, the synchronicity of the Universe," he looked up and smiled at me;

"For it was the day of the Summer Solstice, many, many years ago, that Purlean's family finally found her again. It was also the day the Coven of 3's magic was activated and the day she had to make a terrible choice, a choice that would affect all black cats through out the world for evermore and cause such debate as to whether black cats are lucky or not. That was the day black cat magic came into being and the seeds of the fall of The Second Great Age of Cats were sown, and watered,"

Was that a tear I could see in Mogsie's eye, I couldn't be sure as he paused for a second?;

"But to make sense of it let me start at the very beginning..." 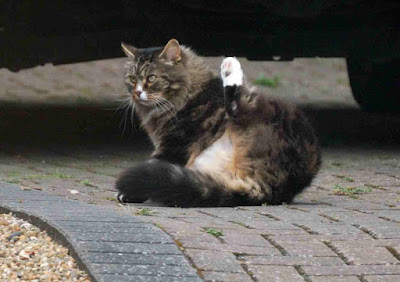