We were hiding high up into a tree, overlooking a grassy patch by the lake The Fly had talked about. Below us a cat I presumed to be Leopold was sitting in the sun cleaning himself and Purlean had just walked out from one of the woodland paths and was standing watching him.

"Oh they're not too far behind, everyone's on a search for food spreading out a little but don't worry they won't be disturbing these two, at least not yet."

"Hello." Purlean finally spoke, taking a step forward. "It's been a long time since I've seen another cat."

Leopold looked up, a twinkle in his eye, his coast glossy and luminescent and extended a paw.

"Hello pretty lady and what brings you my way." He winked at her and dipped his head in a bow.

I turned and smiled at The Fly, "He's confident!"

I looked back down to see Purlean had taken a few steps closer to him to take his paw. Quick as a flash, and I wasn't sure how, he had her paw in his hand and bent his head to kiss it, keeping his head eye, maintaining eye contact.

She didn't stop him.

"I'm here with some friends of mine, they may be here in a minute, we're on a search for food."

"Well we can't have a lady as beautiful as you being hungry now can we!" Leopold stood up and walked towards the water edge, indicating that Purlean should follow.

There on the riverbank was a freshly caught fish, drying in the sun.

"Help yourself, there's plenty more, enough for all your friends."

Purlean smiled and took a paw full, popping it in her her, her face not denying the deliciousness.

"So you say it's been a while since you've seen another cat?" Leopold brushed a speak of leaf off Purlean, she giggled.

"Yes." Her eyes tightened, trying to stop a sad memory of her family from spoiling the moment.

"Been a little while for me too." He winked again.

Suddenly a small giggle came from the tree opposite caught my attention.

"I keep on forgetting you're here with others, you've kept yourself pretty well hidden."

I looked back down again to see Leopold had moved in and was now kissing Purlean, who appeared to be totally receptive to his rapid ways.

"Blimey." I half laughed to myself by whispered to The Fly, "He really doesn't waste any time."

"Darling, Darling magic." The Fly nodded back into the wood;

"It brings those together who want to find love. Always a perfect match." He smiled back down at them both;

"However, I think at this point we should give them a little privacy."

I was finding the scene so sweet, it was nice to see Purlean enjoying herself, it was like a totally different cat. Gone was the cold, stolic cat who I hadn't really taken to and was a bit disappointed in replaced by this sweet, cat, a face of sunshine.

The Fly moved a hand up to his mouth and pretended to cough.

"Come on they need some alone time, to let that love grow, we'll be back later but let's just leave them to it."

The penny dropped and I blushed. 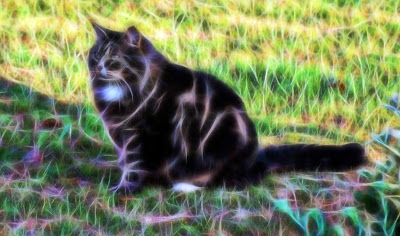