I Think It's Worth A Go

The Fly pointed towards some rocks near a little stream. 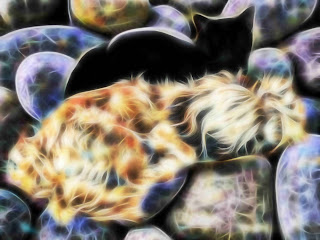 We were in a completely different part of the enchanted forest and this place was a lot colder, the Darling, Darling and Purlean were laying next to each other, keeping each other warm. Bob and Ursa were both asleep, although unlike the other two not next to each other.

"How far have we jumped?"

the Fly was perched on my shoulder, I think he must also have been feeling the cold.

"Winter! They've missed the Summer fair then." I guess I was stating the obvious.

"Oh yes but they are still heading on their way, to the one next year, poor Bob not a clue what's going on."

I laughed for possibly the first time since this crazy adventure began.

"It's nice to see those two getting close." I nodded towards Purlean and the Darling, Darling.

"I feel so lonely." Purlean's voice softly drifted from where they lay. The Darling, Darling smiled.

"It must be hard, being a cat all alone, everyone needs some like minded company."

"Ursa took me in when I was feeling very alone and for that I will always be grateful." She paused, lost in thought, a slight tension showing around her eyes.

"Does she mean when what happened with her family?" I asked the Fly, "My friend George told me all about that?"

The Fly nodded, "It's amazing what circumstances can throw individuals together."

Purlean and The Darling, Darling both looked in our direction and the fly put one of his arms against my mouth, to shush me. I felt so nervous, had they seen us, I couldn't be sure and I was too scared to even breath?

After a couple of seconds they got back to their conversation. Phew, we'd not been spotted, I must remember to be quieter.

"I've been travelling with her for a long time now and she's been very kind to me but I must admit something feels like it's missing."

Purlean looked up at the sky, it was early morning, night had passed but it was still too early for everyone to be up and awake, a few of the stars could still be seen shining against the blueness of the last drops of night.

"I bet," The Darling, Darling nudged Purlean, "If you wished upon one of those stars, the universe would hear you."

"You think so?" For a second Purlean broke into a grin. The Darling, Darling smiled back;

Purlean closed her eyes and pointed her head skywards.

The Darling, Darling smiled at her before turning directly to face us and winked, her mouth opening but no sound coming out;

I turned to look at The Fly who was waving at her and mouthing hello back before turning to me;

"Come on, let's go while they're busy, we've not got far to go, just half a day away from here the stream turns into a lake, that's where we're heading."

"What are we going there for?" I whispered to him as we back silently out of the bush that we were hiding in.

"That's where Purlean is going to meet Leopold and this I don't think you are going to want to miss!"


Cats and Dogs - Another Side
www.riverssong.net/2015/07/very-hard-work.html