I Could Hardly Believe

"I can't see Bob or The Darling, Darling."

We'd stationed ourselves on the top of an old house near Middle Town's town centre, a quaint place consisting of around 100 wooden houses, a school, town meeting place and a variety of stalls selling wares, it was night and nothing was on display although a few people were milling around chatting, dusk was settling and some of the houses had already started lightening their candles. Ursa and Purlean were walking slowly through the town gates, along the mud highway that would lead to the town centre.

"Ursa persuaded them to stay in camp about an hour that way," He pointed back into the wood;

"She won't want them to see what she's about to do. It's not going to be pleasant and she needs them both on side and they wouldn't be after tonight."

I turned back to see Ursa and Purlean now entering the town square, about 100 meters away from where we hid. She'd been noticed, I guess stranger at night was not a common occurrence.

"Hello," A young man stepped forward, "Can I help you."

Looking him up and down with distain she turned away from him and clapped her hands. The people in the square looked surprised at her manner, a couple whispered.

"I am Ursa and I will give you one chance to be compliant with my wishes or I will obliterate this place. Now.."

The young man stepped towards his face distorted by anger;

"Who do you." He didn't get any further, Ursa turned to him and quick as a blinking eye he was gone. Gasps rang out and a little girl, no older than 10, ran towards where he had been.

"Gone little girl, now stop your crying or you'll join him. Now..." She turned back to the remaining people, plainly in fear.

"Go get everyone, EVERYONE, including all the children!"

The remaining people ran away.

Ursa bent down to Purlean, sitting by Ursa's legs and gave her a stroke. Purlean looked up, I couldn't see her expression.

"No need for you to worry, if we remain quiet we won't be discovered and we'll be OK."

"I'm scared." I know I'd seen Ursa's powers before but this was the first time that I was truly scared, my heart was in my mouth, as dry as the desert.

A noise ensued as the towns folk started returning to the square, some angry, some upset, a few came with torches, a few chanting WITCH!

"A witch and this time a real one and not some innocent person you humans decide you don't like the look off and punish as one."

"My son, my son, what have you done with my son?" A half bent over lady in a blue shawl was at Ursa's feet;

"What have you done to my son?" Her daughter holding onto her hand, crying.

Ursa faced her, hate in her eyes.

"He's gone do you want to join him? Silly question."

Bang, hand pointed towards her and she was gone too, the little girl slumped to the floor, sobbing. More cries from the crowd, a few others started crying.

Ursa spun and faced one of the men chanting ""Witch!"

Bang, hand pointed and he too was gone.

"Anyone else?" She moved her gaze from left to right.

The crowd had fallen silent.

The sky dark before suddenly glittered with bolts of light, a cries, gasps and general rumblings came from the crowd. Ursa smiled;

The bolts of lights continued, the clouds parted and the sound of huge wings flapping echoed across the town and there out from the clouds, a flash of red.

I turned to The Fly, his eyes staring up, and back to the sky, I could hardly believe what I was seeing. I thought I was scared before I was even more terrified now for there flying down from the clouds, through the bolts of lights heading straight towards us, a huge red and silver dragon, bolts of light coming from it's mouth as it swooped low over the square! 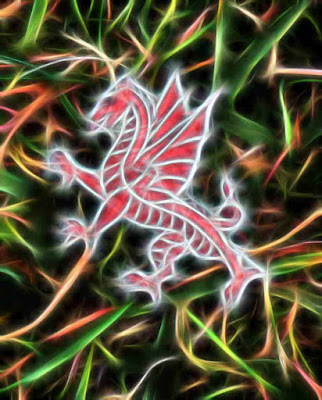