Everyone's been out for the day so that means I've had the entire house to myself.

Of course I took full advantage of my alone time. I broke into daddies bedroom and had a nice long sleep on the bed, it's not something I'm allowed to do at night as I keep River up.

I awoke to the sound of something coming through the letterbox but I knew it was much too late for it to be the post person so I ran down to have a look. There on the floor was a leaflet, as it turned out a very important communication.

A cat from up the road called Peter has gone missing, on the leaflet was his picture and contact details. Now although I've never met Peter that doesn't matter, a cat in need or peril is a call out for action from every cat to help.

I sprung into action, going straight out the backdoor and into the garage to check to see if he had got lost as was hiding out in there. The garage was empty so I jumped up on the back wall and had a scout over the gardens calling out his name. No response unfortunately.

That won't stop me from keeping an eye out and an ear to the ground.

I expect by now, Mogsie, George and co have also got the communicado and are out looking because for the past two hours I've been sat in the front window watching out to see if Peter walked by, still lost from coming into unfamiliar territory and in my entire time there I didn't see anyone, although I must admit to falling asleep for a while, it was hot.

I do hope he gets home safe and sound. 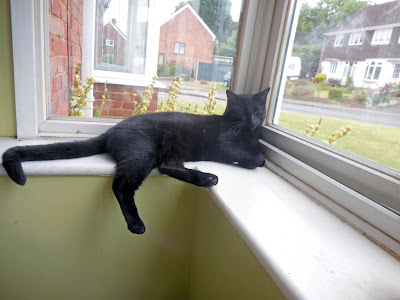