If I had an doubt about Mogsie's ability to lead and look after us all it's just been quashed.

I'd just finished dinner and decided to join Daddy in the window, watching the last sun of the day paint everything a warm orange when I spotted what I thought was Mogsie sitting in the bushes over at Tiny's house.

I watched him with a growing sense of amusement as just the odd ear tip or eye suddenly appeared from behind the plant as he looked left or right. That's when all of a sudden it happened. I hadn't notice that a rather large dog was walking up the road, being led by his mum, just as the dog reached Mogsie it lent in for a look. Quick as a Flash out came Mogsie's paw swiping at the dog who jumped back in surprise before running off after his mummy.

Wow there really is nothing Mogsie is scared of tackling, makes me feel a lot more secure that he knows exactly what he's doing with Flash and Foxy Lectar.

How on earth could I have doubted him? 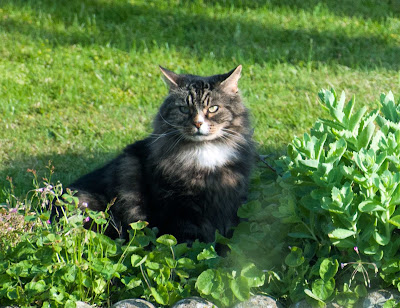