It's a lazy stormy day today it's been a one this time still hopefully it will be over soon.

River and I have just been laying around. I had my eyes closed but was listening to Daddy reading something on the internet when my catty powers sprung into action at something he was reading.

It was all about the symbolism of Black Panthers, a programme on TV was telling the tale of a door knocker shaped as one.

My ears pricked up at;

"Black Panther disappears in the mist between the branches of the trees, like a whisper deep in the jungle where the trees sing the songs of the journeys of souls that have passed this way before. The lack Panther appears for you to challenge you to overcome the fears held within your shadow."

I gasped, suddenly it was all coming back, what happened with Purlean on the raft on the way to England, heading towards the final battle that heralded such a change in the Great Age of Cats.

Daddy carried on, the muscles in my head straining to catch every word;

"Things are not always as they appear, at first glance the Black Panther appears to be a purely black cat, but upon a closer look he has the spots of Jaguar hidden within in the coat. The black Panther is in fact a Jaguar with black pigmentation of fur rather than golden coloured fur sported by the Jaguar. Black Panther spirit guide can bring the meaning of things being hidden in plain view. it is only by your keen observation that something more significant reveals itself, this can be circumstance as well as intention of others."

Daddy gasped at that one! 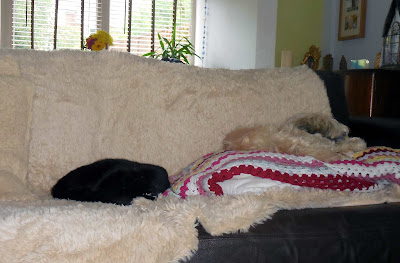 Quoted text from original source Universe of Symbolism.
More on animal symbolism can be read at:
http://www.universeofsymbolism.com/black-panther-symbolism.html
at 13:30