Don't Get Too Comfy

I've just spotted Spit sitting in Mogsie's place, um not too sure how I feel about that! I thought Daddy was going over their to shoo him off but he knocked on M's door and got a package, she must have taken it in for him.

I was glad he did as he came back with information, Mogsie's cone collar is now off and he's venturing upstairs now although it is taking him a time what with his tail bandage and everything. M said that he's beginning to want to come outside which is a good sign although he's still not well enough yet. Fingers crossed he's on the mend now although they've got to take him back to the Doctors later on this week. 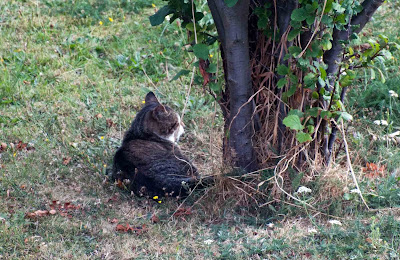