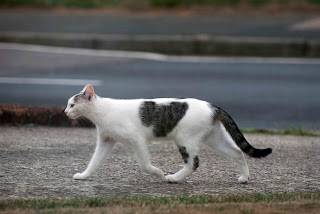 What a day it's turned out to be. It started out a normal Sunday, I came downstairs early with Stay Daddy while River and Disappears had a bit of a lay in.
I was up with Daddy in the window when I saw the lighter Naughty Twin walking by, I called out and she saw me but no signs of Foxy being over their last night as far as she knew. 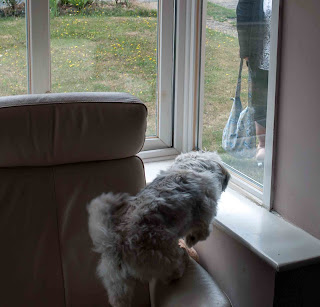 I then heard Disappears and River coming down so decided to swap places and go back upstairs for a bit of a rest. I'd just got settled when I heard the doorbell going, curiosity and the cat and all that and I ventured back and could see River going crazy at the window, outside the Daddydaddy and Daddymummy had turned up. River generally goes loopy when they come so I decided to let her get it out of her system before coming back to say Hi.
I'm not sure how long I was asleep but when I did wake things seemed a little calm so I thought I'd come down and see how things where, I like the Daddymummy she came and looked after us and we bonded, she's a very nice lady and always makes sure she includes me, River was waiting so I ran up to the table out of her way.

The Daddymummy came up I thought to see me but then she laid her hands on the table, I think she was about to have a seance or something like that and not wanting to disturb her I decided to go out and enjoy some of the afternoon sunshine, it really is a beautiful day. 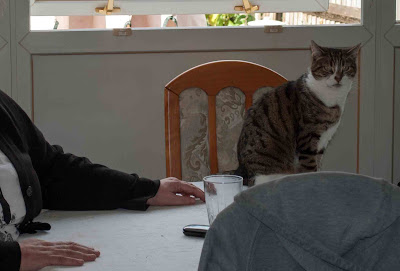 It was when I went outside that I saw it, Foxy Lectar do-dah's right by the backdoor. OMG he was within a foot of the house last night.

My heart pounded a bit, it was our plan to lure him in but it's a bit different when you are confronted with the evidence that he's not only been here but so close and so disrepectful but then again what do you expect from such a scoundral!

I thought I'd go up and have a chill out in the Peace Garden and see if The Wiseman was available to give any sound advice. I didn't have time to tune in when I heard it again; 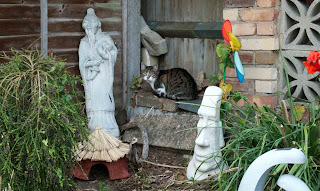 OMG what with everything that had happened with Mogsie and Foxy this past couple of weeks the LUM from the Easter Island Head had gone to the back of my head.

I would have explored things further but then River and Stay Daddy came out looking for Nadia, he must have seen the poop and realised she would be in danger if she buried herself in for the night. Mogsie had a difficult enough time with Foxy, there's no way Nadia would be able to take him on.


I went searching for any of the group but had no luck, although later on when I came back and the Daddymummy and Daddydaddy had gone I managed to catch hold of Spit and fill him in. He said he would spread the word, our plan looks like it's working, let's see what tonight brings! 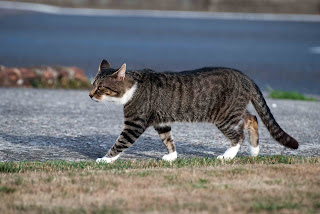 Cats and Dogs - The Other Side
www.riverssong.net/2013/08/its-been-brilliant-day.html